Accessibility links
Mahler's First Symphony: A 'Titan' From Boston When Gustav Mahler's Symphony No. 1 made its debut in 1889, it was misunderstood not only by audiences, but also by the composer himself. Mahler revised, renamed and retooled his sumptuously scored symphony several times.

We regret that the audio for this concert is no longer available. 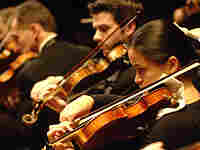 The fourth movement springs suddenly, like a lightening bolt from a dark cloud. It is simply the cry of a deeply wounded heart.

Mahler On a Roll

Hear Mahler play his own music from a 1905 "Welte" piano roll. 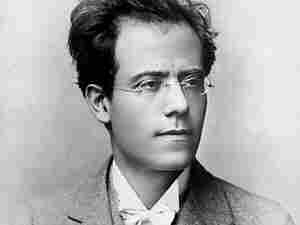 Gustav Mahler's Symphony No. 1, with its massive size and odd sounds, left audiences bewildered at the time of its premiere in 1889. Getty Images hide caption

Audiences in Gustav Mahler's time didn't know what to make of his music. Today, we're used to movies and TV shows that careen from action-packed explosions to romance, from comedy to melodrama. But more than a century ago, when Mahler inserted folk melodies into his enormous symphonies, some listeners thought he was nuts.

The second movement of Mahler's Symphony No. 1 is a folk dance. The third movement is a spooky funeral march, with klezmer accents, based on the "Frere Jacques" melody. The stormy finale begins with an alarming bang and builds to a huge climax. The symphony had a lot, maybe even too much, for 19th-century audiences to absorb.

In 1899, audiences in Vienna hissed when they heard it; they were used to Brahms and Beethoven. But today, it's hard to resist the pull of a piece that begins like Mahler's First: The strings play a single note spread out over seven octaves. Mahler said it was "like a sound of nature."

For the premiere of his First Symphony (in Budapest in 1889), Mahler tried giving the audience something to think about, something to attach itself to. He told people that his music was loosely based on a novel by the popular writer Jean Paul, a novel called The Titan. After the premiere, Mahler started revising his symphony, and he eventually decided to drop the association with Jean Paul's book. But the name, "The Titan," stuck.

Conductor Benjamin Zander leads the Boston Philharmonic in concert at Sanders Theatre, on the campus of Harvard University in Cambridge.