Accessibility links
Thompson's Watergate Role Not as Advertised GOP presidential candidate Fred Thompson entered the public spotlight in 1973 as a lawyer for the Senate Watergate committee. He played a role in uncovering the Nixon White House tapes. But his actions may not have been a matter of telling truth to power. 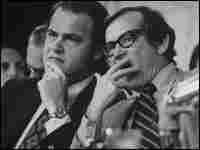 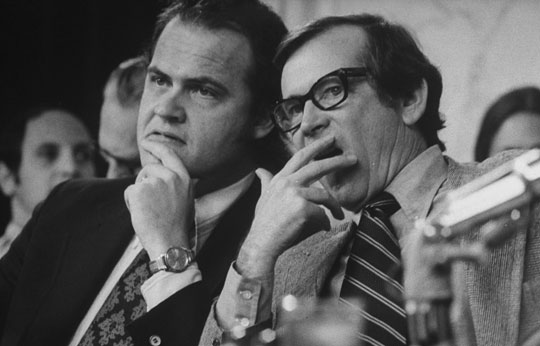 Fred Thompson (left), with Republican Sen. Howard Baker, listens to proceedings during the Watergate hearings in 1973.

Republican presidential candidate Fred Thompson's first experience with big league politics thrust him in the spotlight as chief Republican counsel on the Senate committee investigating the Watergate scandal. Thompson's pressing of former Nixon aide Alexander Butterfield led to revelations of the existence of recorded conversations in the Oval Office.

This early national attention takes on new relevance as the clock ticks on the presidential nominating process; Iowans will begin the process of choosing the party's nominee in just nine weeks. Thompson's public role in the hearings is clear. However, just how did this early moment of confrontation shape Thompson?

In the spring of 1973, President Richard Nixon has just been re-elected in a 49-state landslide. But the victory was tainted by increasing evidence that his closest aides had conspired to suppress political opposition, most blatantly by planting a telephone bug at the Democratic National Committee offices in the Watergate building in Washington.

The Senate named a select committee to investigate and the panel's Republican was Howard Baker of Tennessee. For his chief counsel, Baker brought in a side-burned, 30-year-old lawyer from his home state.

"I had high regard for him as a lawyer and as a friend," Baker said.

The young friend was Fred Thompson. One morning that summer, Thompson would become famous when — during one of the nationally televised hearings — he questioned Butterfield.

Thompson began, "Mr. Butterfield, are you aware of the installation of any listening devices in the Oval Office of the president?"

Butterfield, after a long pause, responded, "I was aware of listening devices, yes sir."

Thompson worked methodically through his questions. "On whose authority were they installed, Mr. Butterfield?"

The session was a turning point in the investigation.

Baker had famously, and repeatedly, asked, "What did the president know, and when did he know it?" After Butterfield's testimony, everyone knew that Baker's question could be answered, definitively, from tapes in the White House.

Nixon fought for a year to keep the tapes secret. But when the Supreme Court ruled unanimously against him, he was done. In August 1974, he resigned.

An Ambiguous Role in Watergate

Today, the Web site of Thompson's presidential campaign says he "gained national attention for leading the line of inquiry that revealed the audio-taping system in the White House Oval Office." But in other accounts, Thompson's role in the Watergate probe was much more ambiguous.

One instance came at a hearing three weeks before Butterfield testified. The witness was John Dean, formerly Nixon's chief counsel, then the star witness against the president.

Thompson opened his cross-examination with an attempt to disarm Dean: "I hope I'm not considered to be badgering you in any way, but I'm sure you realize, as one lawyer to another, that your actions and motivations are very relevant."

Dean shot back, "In fact, if I were still at the White House, I'd probably be feeding you the questions to ask the person who's sitting here."

Thompson hesitated and then began, "Well, Mr. Dean," as laughter rolled through the hearing room. "And if I were here as I am, I would respond as I have responded, that I don't need any questions to be fed to me from anybody."

In fact, Thompson was being fed information — by Nixon lawyer J. Fred Buzhardt. White House tapes, later made public, captured Nixon, Buzhardt and others discussing the cooperation of both Thompson and Baker, not once but several times.

In a phone call on June 11, 1973, for example, Nixon asked for "a brief report" from Buzhardt, and the lawyer said, "I found Thompson most cooperative, feeling more Republican every day." He added that Thompson seemed "perfectly prepared to assist in really doing a cross-examination" of Dean.

How'd He Know About the Tapes?

But the Oval Office tapes fail to address another question: How did Thompson come to question Butterfield about the tapes?

Thompson already knew what Butterfield would say. Butterfield had spilled it all to committee investigators in a private meeting three days earlier. And a memo written by Thompson had prompted him to do it.

The Democratic investigator in the meeting, Scott Armstrong, had obtained an old memo of Thompson's, intended to be seen only by the committee's Republicans. In the document, Thompson had summarized a set of attack points — delivered from the White House — and included long quotations from Nixon.

During that meeting of committee investigators, Armstrong laid the memo in front of Butterfield and asked about the long quotes. Was there a stenographer in the Oval Office? Did Nixon dictate something?

Butterfield said no and no.

With the question still hanging there after three hours, Armstrong turned it over to his Republican counterpart, Don Sanders.

"If it weren't for Thompson having created the document and collaborated with the White House on that, the taping system would not have been found," Armstrong says. He says he has always been amazed that Thompson got such a boost from the disclosure of the tapes. "I thought Thompson would be filling out his resume looking for new work."

Thompson's campaign didn't respond to an NPR request to speak with the candidate. But his recollections were recorded at a reunion of Watergate committee veterans in 1992, by a program called the Public Radio Law Show. NPR obtained the tape from the library of the University of Missouri, Columbia, which received Sanders' papers after he died in 1999.

On that program, Thompson recalled events this way: "Don Sanders on the staff really was the guy who asked the question at a staff meeting. He came to me and told me that. And that was kind of my reaction, somewhat of a surprise, to say the least." Sanders was Thompson's deputy counsel.

Also during the 1992 reunion, Sanders recalled asking Butterfield pointblank if there was a taping system: "He said, 'Well, I was hoping you wouldn't question me about that. I wondered what I would say if I were asked that, but I feel like I have to tell the truth.' So he did."

To relay the news to Thompson, Sanders said he first had to call him out of a local pub. "Because he was with some reporters, I got him away from them, and got him out on the street corner and told him the story," Sanders said.

Committee Democrats were glad to let Thompson be the one to drop the bombshell on television.

"By having Thompson ask the question, you're having the president's own people ask the embarrassing question," said Stanley Kutler, a long-time historian of Watergate at the University of Wisconsin. "So it's no great heroic task that Fred Thompson takes on."

Kutler sees Thompson as someone who successfully navigated treacherous waters, while always mindful that he was working for Baker. He said it's not a case of someone telling truth to power.

"Is this a defining moment for Fred Thompson?" Kutler said. "Maybe it really was, because for the first time it put him in the public eye. And I think it's safe to conclude that, having been in the public eye, he kind of liked it."