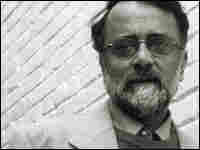 Arrests and protests have followed last week's declaration of martial law in Pakistan, where President Pervez Musharraf has ousted the chief justice and cracked down on dissent

Rashid reports on Pakistan and Islamic fundamentalism for several Western newspapers. He's also the author of the best-selling book Taliban. 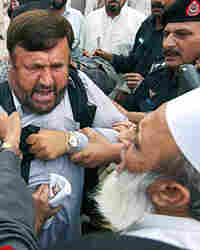 "Go to every corner of Pakistan and give the message that this is the time to sacrifice," Iftikhar Muhammad Chaudhry, who is under virtual house arrest in Islamabad, told lawyers by mobile phone. "Don't be afraid. God will help us and the day will come when you'll see the constitution supreme and no dictatorship for a long time."

Later, in the central city of Multan, hundreds of police blocked about 1,000 attorneys from leaving a district court complex to stage a street rally in defiance of a ban. Both sides pelted each other with stones and officers swung batons to disperse the crowd.

The protests have been sporadic. Few appearing willing to challenge Musharraf's weekend order that suspended the constitution, ousted independent-minded judges, put a stranglehold on the media and granted sweeping powers to authorities to crush dissent.

Kamal Siddiqi, editor of the News International in Karachi, told NPR's The Bryant Park Project that authorities had tried to shut down his newspaper. He said reporters and editors were struggling against edicts from the government.

The Pakistani president has told foreign diplomats that he is determined to move forward with what he called the third stage of the country's transition.

"Once we correct these pillars — the judiciary and the Parliament — I can assure you there will be harmony," he said. "Confidence will come back into government ... and Pakistan will start moving in the same direction as we were moving."

It was not clear when parliamentary elections, which have been postponed, would be held.

President Bush on Monday issued a call for Musharraf to lift the emergency order, hold elections and leave his military post, a key issue with opposition politicians.

"We expect there to be elections as soon as possible and that the president should remove his military uniform," Bush told reporters during a joint White House news conference with Turkey's Prime Minister Recep Tayyip Erdogan.

"At the same time, we want to continue working with him to fight these terrorists and extremists who have not only tried to kill him, but who have used parts of his country from which to launch attacks into Afghanistan and/or are plotting attacks on America," the president added.

A Last-Ditch Effort to Maintain Power?

Tuesday's clashes marked the second day of unrest since Musharraf, who took power in a 1999 coup, since he declared the emergency. Thousands of people have been jailed.

Many say Musharraf was making a last-ditch effort to cling to power, though he says his primary aim is to help fight rising Islamic extremism. The moves came ahead of a Supreme Court ruling on whether his recent re-election as president was legal. The top judge, Chaudhry, was removed and other independent-minded justices replaced.

The authoritarian measures have drawn widespread international criticism, but so far only the Netherlands has punished Pakistan, freezing most of its development aid.

The United States, Pakistan's chief foreign donor, says it is reviewing aid to Pakistan but appeared unlikely to cut assistance to a close ally in its war on terror. U.S. aid to Pakistan has totaled more than $10 billion since the Sept. 11, 2001, attacks in America. But Defense Secretary Robert Gates suggested that military assistance may not be affected so as not to disrupt efforts to fight al-Qaida and other militants.