Accessibility links
Torture Still Hot Topic as Mukasey Advances Senate Judiciary Committee members voted 11 to 8 to approve Judge Michael Mukasey as the next attorney general. But with no votes in doubt, debate focused less on the nominee than on waterboarding. The full Senate could take up the nomination on Thursday. 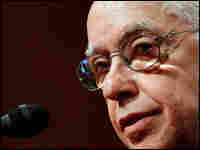 Senate Judiciary Committee members on Tuesday approved the nomination of Judge Michael Mukasey as the next attorney general. The nomination could head to the full Senate as early as Thursday. Win McNamee/Getty hide caption 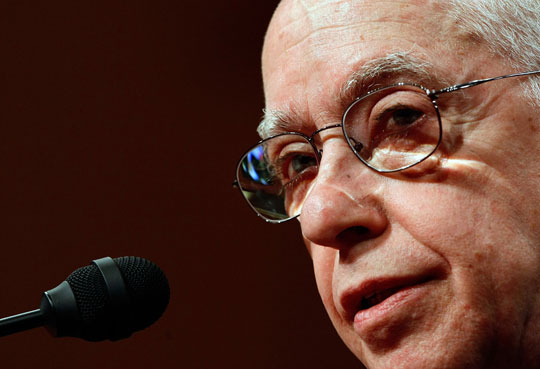 Senate Judiciary Committee members on Tuesday approved the nomination of Judge Michael Mukasey as the next attorney general. The nomination could head to the full Senate as early as Thursday.

Waterboarding is an interrogation technique of controlled drowning. It has dominated Judge Michael Mukasey's nomination process ever since he refused to say that waterboarding is illegal.

The Senate Judiciary Committee on Tuesday approved the nomination of Judge Michael Mukasey as attorney general. The vote was 11 to 8, with Democratic Sens. Charles Schumer (D-NY) and Dianne Feinstein (D-CA) joining committee Republicans to send the nomination to the full Senate for further action.

With no votes in doubt, the committee debate focused less on Mukasey than on the interrogation technique that got him into so much trouble: waterboarding.

Waterboarding is a process of controlled drowning used in the Spanish Inquisition and by tyrannical governments ever since.

For more than a century, it has been considered a war crime by the United States and prosecuted as such. The top legal officers of all the military services have testified that waterboarding is illegal under U.S. and international law.

But the Bush administration reportedly authorized the use of the technique on at least three prisoners, leading senators to question Attorney General-designate Mukasey on the subject at his confirmation hearing last month. His refusal to say categorically that waterboarding is illegal propelled his nomination into controversy and became the nub of Tuesday's debate.

Squaring Off over Torture

"The president says we do not torture, but had his lawyers redefine torture down in secret memos in fundamental conflict with American values and law," Leahy said.

All of the Democrats and most of the Republicans who spoke agreed that waterboarding is illegal under both U.S. and international law. Feinstein said she was troubled by Mukasey's refusal to agree with that.

"But I don't believe that Judge Mukasey should be denied confirmation for failing to provide an absolute answer on this one subject," Feinstein said.

And Feinstein relied, too, on assurances Mukasey had given to Schumer:

"He has personally made clear to me that if Congress passes a bill banning torture, he will enforce it," Schumer said.

That prompted this response from Sen. Ben Cardin (D-MD):

"Does that mean we have to outlaw the rack?" Cardin asked. "I'm even more troubled."

And Sen. Edward M. Kennedy (D-MA) asked why, in essence, the Senate should trust Mukasey's assurance about enforcing a new law when laws on the books already prohibit waterboarding.

"We are supposed to find comfort in the representation by a nominee to the highest law-enforcement office in the country that he will, in fact, enforce the laws that we pass in the future? Can our standards really have sunk so low?" Kennedy asked.

Ranking Republican Arlen Specter (R-PA), however, said that there are serious questions about whether waterboarding and other techniques widely considered to be torture should be permissible in certain circumstances.

"I don't have all the answers to this complex question, a very fuzzy area," Specter said.

"If we allow our executive in certain rare circumstances to use techniques like waterboarding, then what do we say when a downed airman is in the hands of another enemy in another war, and they argue, 'Well, I had to do this, because I needed to know when the next air attack was going to occur,'" Graham said.

The Mukasey nomination now goes to the full Senate for a vote, possibly as early as Thursday.