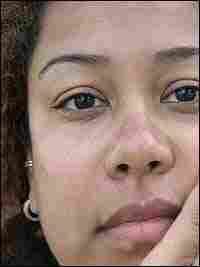 Last week, French aid workers were arrested in Chad for attempting to remove more than 100 children for placement in Europe. Eleven of the workers remain in jail, facing accusations from Chad that kids they billed as orphans in fact had families that wanted them back.

Officials with the French charity, Zoe's Ark, say they were trying to give the kids a better life. That doesn't sit right with Chadeans, who object to the idea that their African children would be better off in European homes.

Lisa Marie Rollins, founder of Adopted and Fostered Adults of the African Diaspora, wrestles with so-called baby lifting and the impact of transracial adoption. Rollins herself was adopted by a white family in Washington state when she was 3 months old.

Rollins says her birth papers described her as Mexican, Filipino and Irish. "My theory is that it was basically kind of a marketing decision," says Rollins, who writes about the transracial adoption experience at A Birth Project.

She describes growing up in a family of people with blue eyes and blond hair, not just the only black child in her town but the only child of color. In those early years, she says, "I basically am going through life with people telling me that I'm not black, when it's clear that I am black."

Today, Rollins says she loves her adoptive family and remains close to her adoptive parents, but would like to see the end of adoption as we know it. In the present system, she argues, black women are more likely to have their children taken away and less likely to be offered chances for reuniting with them. "These are the types of things that we're concerned about it," she says.

Questions or comments? Check out the open thread on our blog.