Accessibility links
Parsing 'Sentences: The Life of MF Grimm' Rapper Percy Carey, a.k.a. MF Grimm, has survived several murder attempts, including one that left him paralyzed from the waist down. He's got a new album, The Hunt for the Gingerbread Man, and he's just published an autobiographical graphic novel. 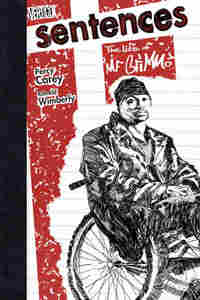 The rapper MF Grimm, whose real name is Percy Carey, has written a graphic memoir entitled Sentences: The Life of MF Grimm. He spoke to Terry Gross about his story.

During the Blizzard of 1994, Percy Carey and his brother Jay were sprayed with gunfire as the got in their car on the way to sign a record deal with Atlantic Records. The bullets paralyzed Carey from the chest down, and killed his brother. Six years later he was sentenced to life in prison on narcotics and conspiracy charges.

Carey's criminal life had taken him far from where he began — he was the first child to ride Snuffleupagus on Sesame Street. A born performer, Carey was on the show from 5-years-old until around 9. He also remembers his childhood and teenage years as the time when he became interested in rapping.

Carey began writing, recording and selling records while still in jail. He also began studying law and suing every prison to which he was sent. After three years, his sentence was reduced and he was released. Since then, Carey has started a record label, Day by Day Entertainment, and returned to recording. His new album is called The Hunt for the Gingerbread Man.