Accessibility links
Missouri Sex Abuse Charges Dropped State prosecutors in Missouri have dropped child sexual abuse charges against the leaders of a small church, one week before their trial was due to begin. A defense lawyer said the charges were dropped after two of the accusers stopped cooperating with authorities.

State prosecutors in Missouri have dropped child sexual abuse charges against the leaders of a small church, one week before their trial was due to begin. A defense lawyer said the charges were dropped after two of the accusers stopped cooperating with authorities. 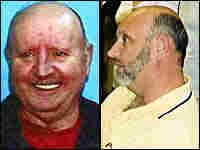 Pastors George Otis Johnson (left) and Raymond Lambert lead a small religious community in a remote part of the Ozarks. Several young women who grew up in the community have accused the two men of molesting them when they were children. Courtesy Tara Brown/ Newton County Sheriff's Office/John Ford, Neosho Daily News hide caption 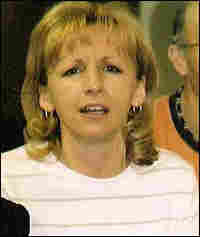 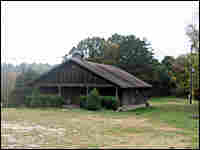 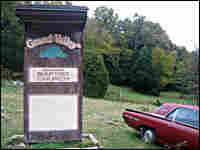 A sign marks the entrance to the Grand Valley farm. As recently as this spring, about 100 people lived on the farm. Today, only about two dozen remain. Doualy Xaykaothao hide caption

Some of the alleged sexual contact may have been committed as part of a ritual or ceremony, crimes that are rare in the United States. NPR has reviewed extensive legal documents in these cases over several months and also talked to most of the accusers, as well as some of the accused.

The area of Missouri where the cases surfaced has been home to extremist and fringe groups in the past. Data show that a high number of cases of child sexual abuse in the same area are reported annually to the Department of Social Services. What makes this story different is that almost all the accusers — five so far — and the accused — five in total — are related by blood or marriage.

"We have, in McDonald County, Raymond Lambert, who is married to his stepsister," Dobbs says. "We have George Johnston, who is an uncle to Raymond Lambert. It is alleged by some members of that community that the religious leaders may, in fact, be the biological parents of several children who have been born into this group."

Our story focuses mostly on the pastors Raymond Lambert and his uncle George Johnston. Both men are charged with multiple counts of statutory sodomy or child molestation. Pastor Lambert led his flock on a 100-acre farm. Pastor Johnston led his on a 10-acre farm. They ministered in the family's Grand Valley Independent Baptist Church.

Earlier this year in the spring, 10 people secretly moved out of the 100-acre farm. Most of those left behind were shocked, since members of the religious community were unusually close.

A woman who left with this group agreed to be interviewed, but only on condition of anonymity. NPR agreed to this because she fears for her and her family's safety. She is also an alleged victim named in one of the child sexual-abuse cases. The woman, in her late 20s, says she fled because she realized her extended family was behaving like a religious cult.

"They operate in a cult-like fashion," she tells NPR. "Raymond Lambert sets all the rules for the people who live there. He tells you what to go to school for, he tells you who to marry. He basically controls your life."

Former residents of this religious commune say non-church members were kept at arms-length. While children were home schooled, adults did have jobs outside of the farm. Some worked at Wal-Mart's headquarters in nearby northern Arkansas. The anonymous woman says Pastor Raymond Lambert told her to study music in college, so she became a music teacher.

One day last year, while surfing the Internet, she accidentally came across a cult-awareness Web site. The Bible-based cults she read about began to sound as if they were pages out of her own life. Alarmed, she contacted a California rabbi linked to the Web site. She says he counseled her for months, and in April of this year, she finally found the courage to leave everything she once believed in. Pastor Raymond Lambert not only controlled her, she says, but he also used his role as a minister to sexually molest her.

'This Was Her Way to Heaven'

"The first incident started with taking my clothes off when I was 15 years old," she said. "He touched me from head to toe, every part of my body, and told me that this body belongs to God. And the only way that I could subject myself to God is to give my body to Raymond, who is God in the flesh."

She grew up on the farm, passionately believing in God and church, trusting that her sexual relationship with Raymond Lambert would bring her closer to God.

"I believed that it was right, and that it was OK," she said. "I didn't feel like I needed to tell anybody, because I was believing in that at the time."

In June, she filed child sexual-abuse charges against Raymond Lambert. Not long after, Missouri police began to investigate other church leaders in the community, including Pastor George Johnston, an uncle of Raymond Lambert.

Mike Barnett, Newton County's child-abuse investigator, says another alleged victim, a 17-year-old girl, told him that Johnston sexually abused her, beginning when she was 8 years old.

"It became worse at about 12," Barnett says, referring to the 17-year-old's case. "He would tell her that he was ordained by God, that this was her way to heaven, and that she needed to give her body to him."

Barnett says he investigates child abuse all the time, and cases involving religion are rare. In a police statement, he says 63-year-old pastor George Johnston told this alleged victim that even if she had sexual intercourse with him, she would remain a virgin. In neighboring McDonald County, the state alleges that Johnston gave "angel kisses" to this same young girl, where the kiss would involve touching and fondling of her breasts and other inappropriate areas.

At a preliminary hearing in October, another alleged victim, 20-year-old Mackenzie Kyle Amey, took the stand in the Newton County courthouse. Assistant Prosecuting Attorney Bill Dobbs asked her what happened in the winter of 1998, when she was 12.

"I was starting to develop or go through puberty," Amey said, "and I had some stretch marks coming, and he told me that he could heal them for me, and he touched my breasts."

On the stand, Amey alleged that Pastor George Johnston, whom she used to call Grandpa, was going to teach her algebra, but instead, "he touched me on my breasts and my vagina."

Months before these allegations, families in the religious community were coping with other disturbing news, says Amey Burkett, who grew up on the 100-acre-farm.

Her grandfather was the late Cecil Epling, a minister originally from Ohio. According to Burkett, Epling wanted his seven sons and four daughters to become a tight-knit community, so he helped buy them the Missouri farm. When Epling died, his stepson, Raymond Lambert, took over the ministry. George Johnston later joined the family's church.

Family members say Cecil Epling passed his sexual beliefs to both pastors, teaching them that they needed to fulfill the sexual needs of their daughters and selected girls in the church.

"What's inside of them is God, and they think that they have all the power, all that it takes to take care of a woman," Burkett says.

Taking care of a woman meant having sex with her, in some cases from early childhood on. Burkett said that Pastor Raymond Lambert believes that women should be put in their place to make them humble. Burkett said that this usually required stripping off clothes.

"He would always say, if you're spiritually hindered, it's one of two things: your mind or your flesh," Burkett said of Lambert. "By taking off your clothes, and knowing that you weren't ashamed of your body, it did feel like it set you free. And I know that sounds weird. A lot of things sound weird to me now. But it didn't then."

Lawyers for Raymond Lambert and George Johnston say each of their clients deny every charge made by the alleged victims.

"No one has begun to question, why are you talking now?" says defense attorney Dwayne Cooper, who represents Raymond Lambert and his wife, Patty Lambert. "What are their motives in coming forward at this time, all of them simultaneously?"

"George and his wife are just absolutely devastated," Wood said. "This has come out of nowhere. These kids that they did think of as being their grandchildren — now these kids have made these just horrible, horrendous accusations against him. And obviously, it's ruined their whole life."

I met Pastor Johnston at a preliminary hearing for one of three child sexual-abuse cases against him. He's a balding man, with a moustache and pasty skin. During the hearing, he sat solemn and devoid of expression, rarely looking up at anyone in the courtroom. When I ask him about the charges against him, he declines to speak, referring me to his lawyer.

Lawyers for Pastor Lambert and his wife, Patty, agreed to let me talk to their clients, but with substantial restrictions. I was allowed only to ask about life on the farm, and how the allegations have affected them.

In a soft voice, Pastor Lambert describes his life: "You wake up one day and things have all changed. And the whole world now seems to be looking at our lives, and they're accusing us. We've been tried and sentenced in the media already."

Lambert says he loves every person who left the 100-acre farm, including those now accusing him of child sexual abuse. He says the allegations have been tough for his entire congregation.

"God said he was going to try us," Lambert said. "The only problem of it is, we never thought we'd be tried in such a way." While he speaks, his wife Patty holds his hand tightly.

"Everyone that lived there by choice would build, and we would watch each other's children as we went out to work," Raymond Lambert says, recalling life on the farm. "And it was a place of a community — it was not something of a forced thing."

'They're Not Fearing Me'

Raymond and Patty Lambert say families left the farm not because they feared Raymond, but because of rumors that the FBI or other authorities might take children away from families and put them into foster care.

"They're not fearing me. That's not what this is about," Raymond Lambert says.

Patty Lambert adds, "The fear came from the outside. I have no great fear of these charges, because I'm going to trust my God all the way through it."

"If our love and our truth about one another, and about what God has given us — and about our relationship, my wife and I — hadn't been based on something true and strong, this would have tore our life apart," Raymond Lambert says.

The child sexual-abuse allegations have affected more than 30 families. One trial date has been set for Pastor George Johnston in February. No matter what the legal outcome of any of these cases, this community that so many believed in for decades is gone.