Accessibility links
Health Care Initiative a Learning Moment for Clinton When she was first lady, Hillary Clinton was criticized for the way she handled her failed attempt to change health care policy. Now, she says, she has learned from her mistakes.

Second in a series 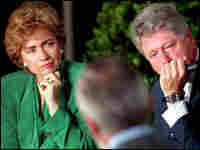 Hillary Clinton, shown here in 1993 with husband President Bill Clinton, had "a tin ear, and she didn't have this instinct for compromise" during her White House years, according to her biographer, Carl Bernstein. Paul J. Richards/AFP/Getty Images hide caption 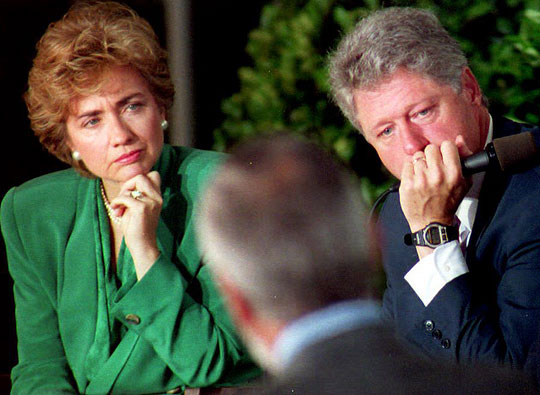 Hillary Clinton, shown here in 1993 with husband President Bill Clinton, had "a tin ear, and she didn't have this instinct for compromise" during her White House years, according to her biographer, Carl Bernstein.

Our series "Crunch Time" explores key moments in the careers of presidential candidates.

Read a Profile of Clinton

Hillary Clinton points to a lifetime of experience — as an advocate, first lady and senator — as the basis of her bid for the presidency. But Sally Bedell Smith, who's written a new book about the Clintons called For Love of Politics, says it is Clinton's White House years that are most illuminating.

"There's nothing like looking at an individual and seeing how they operated in that pressure cooker of the White House, where every single decision had a consequence and every day was filled with stress. That's the real test," Bedell Smith says.

For Clinton, the biggest test was health care reform.

A Refusal to Compromise

Thousands of pages have been written about the Clintons' ill-fated effort to provide universal health-insurance coverage: how Hillary Clinton, as head of her husband's health care task force, designed an overly complicated plan in secret; how she demonized her opponents, and even her potential allies.

But once the plan was threatened with defeat, Clinton made another, perhaps even more consequential decision: not to compromise with any of the alternative proposals that would have provided less-than-universal coverage. In his memoir, President Clinton called his decision not to intervene and accept one of the compromise plans a mistake.

"One of the things that surprised a lot of people about Hillary Clinton in the White House years was it turned out she had a tin ear, and she didn't have this instinct for compromise," says Carl Bernstein, author of A Woman in Charge, a biography of the former first lady.

Bedell Smith recalls one incident in July 1994, when President Bill Clinton was in Boston addressing a group of governors. In response to a question, Clinton said he might accept a health care plan that provided less than 100 percent coverage.

"He no sooner got off the podium than he got a call from Hillary and her office in the White House," Bedell Smith says, "and she said in fairly explicit, profane terms, 'What are you doing? Come back to the White House and come to see me immediately' And on the next day, the president of the United States not only retracted his statement, but he apologized."

Could a Compromise Bill Have Passed?

During an MSNBC presidential candidates' debate in Hanover, N.H., in September, moderator Tim Russert asked Clinton about the missed opportunities to compromise. He noted that Clinton's current health care proposal is similar to a plan proposed by a Republican senator in 1993.

"Your bill today could have passed back then, but you refused to compromise," Russert said.

"I don't think that's a fair reading," Clinton replied. "If you'll remember, there was a decision made by the Republicans then that they would not support extending health care to every American."

It's impossible to know what might have happened if Clinton had compromised. Bernstein says it's easy to forget that the outcome wasn't only up to her.

"It's easy, in retrospect, to underestimate what that opposition was trying to do," Bernstein says, "because Bob Dole was looking to run in 1996 for president, and he was not about to let a compromise health care plan pass."

'She Thought She Was in the Right'

Still, says David Gergen, who was then a senior adviser in the Clinton White House, the health care battle reveals much about Hillary Clinton's instincts.

"There was an element of her personality that had a rigidity about it," Gergen says. "She had high aspirations. She thought she was in the right — if you persevered long enough, you could succeed."

Former Clinton White House Chief of Staff Leon Panetta, who supports Clinton's campaign, saw something that reminded him of the current occupant of the White House.

"I think that was kind of the attitude at the time — that somehow, if you kind of held your ground, that you would be able to push things through. It was what I would call the 'George Bush problem' that we often see today," Panetta says. "She herself ultimately understood that that was a mistake, and that, in many ways, she paid the price for not ...showing the willingness to compromise."

The stereotype of Clinton as combative and self-righteous is perhaps the greatest obstacle to her White House ambitions. One of her campaign's most impressive accomplishments is how it is using Clinton's misadventures in health care to change that stereotype.

Clinton has managed to transform the narrative of her disastrous attempt at health care reform into a story of redemption and growth. When she unveiled her new, much less radical health care plan in Iowa in September, she repeated her stock line that she still has the scars to show for her earlier effort.

But she also said that the earlier defeat had taught her valuable lessons: Make the plan clear and easy to understand, do a lot of listening — and compromise.

"Having spent six years in the Senate, I know that fixing health care will require political will to get the votes we need, and it will take a movement for change, a solid national consensus for reform," Clinton said. "And I will work to build that movement throughout my campaign and as your president. These are new times, and this is a new plan."

But is it a new Hillary Clinton? How voters answer that question may determine whether she becomes president. Bernstein answers yes. He believes Clinton has grown and changed.

"Politics is the art of compromise," Bernstein says, "but what the great political figures — meaning the principled ones — have learned to do is not compromise basic principles and yet, at the same time, to compromise on the way to getting those principles realized as policy. And I think that's what she's learned in the Senate."

Gergen isn't so sure. As a senator, he says, Clinton has learned to reach across the aisle. But for him, the question remains, "Has she changed as a national leader?"

"That, to me, is one of the mysteries surrounding this campaign."