Accessibility links
Gounod's 'Faust' The striking Georgian soprano Tamar Iveri stars as Marguerite in Houston Grand Opera's production of Gounod's Faust, alongside celebrated bass Samuel Ramey in one of his trademark roles as Mephistopheles, and tenor William Burden in the title role.

It may be one of the most popular, tuneful and sophisticated operas ever composed. Still, like the ancient story that inspired it, Charles Gounod's Faust thrives on some pretty basic elements. 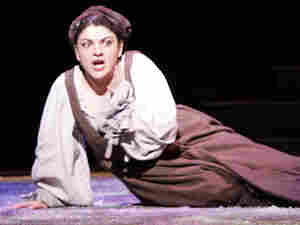 There's a grumpy old man, facing his end and yearning to reclaim his squandered youth. There's a charismatic stranger, hawking a sure formula for health and happiness — a formula that includes a gorgeous young woman, great wealth and boozy good times. And, to keep the good times in perspective, Gounod also throws in a strong dose of religious piety.

All of that is pulled together in a tale that's as old as they come, though its greatest fame came in the 19th-century drama by Johann Wolfgang von Goethe. It's the story of a deal with the devil — of the man who sells his immortal soul for the sake of mortal pleasures.

Gounod's Faust combines some of the darker elements of Goethe's drama with a less weighty French play by Michel Carre, who also contributed to the opera's libretto. At its premiere, in 1859, many considered the opera difficult to comprehend. Since then, it has been widely recognized as the finest work by one of opera's most naturally gifted composers.

The Story of 'Faust' 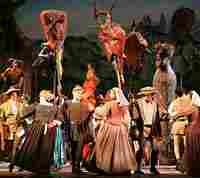 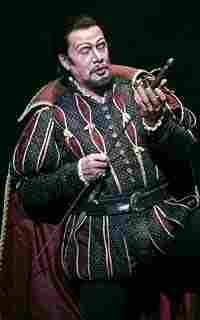 ACT ONE: As the story opens, an aging and decrepit Faust is alone in his study, brooding over his lifelong failure to find wisdom. He decides to kill himself. But just as he's about to drink poison, he hears the songs of peasant girls and workers in the distance. He curses their joy and cries out to the powers of hell. Mephistopheles appears in a puff of smoke and offers up a bargain: He'll grant Faust all the answers to life, and all its passion. In exchange, Faust will yield his soul. Faust hesitates to sign the contract, but Mephistopheles conjures an image of a beautiful young woman — Marguerite. Seeing that, Faust eagerly signs on the dotted line and is transformed into a young man. He and the devil set off for a life of adventure.

ACT TWO: People have gathered at a tavern during the Easter fair. A young soldier named Valentin, Marguerite's brother, is headed off to war. Marguerite has given him a medallion, and he clutches it while praying that his sister will remain safe while he's away. He sings a farewell in the beautiful aria "Avant de quitter ces lieux" — "Before I leave this place."

Students and other soldiers start to carouse. A student named Wagner begins a cheeky song but is quickly interrupted by Mephistopheles, who sings a hymn to greed, the famous aria "Le veau d'or" — "The calf of gold." Then Mephistopheles makes a smart-alecky toast to Marguerite. Valentin finds it insulting and raises his sword, but it shatters. Other soldiers raise their swords in the form of crosses. Mephistopheles cowers and predicts that Valentin will die in battle.

The crowd begins to waltz. Faust offers to escort Marguerite home, but she declines. Mephistopheles laughs, promising to help Faust win her over.

ACT THREE: The young soldier Siebel is gathering flowers for Marguerite in her garden. Mephistopheles has predicted that the blossoms will wither and die as soon as they're plucked, and that's exactly what happens. Siebel vows to warn Marguerite about the untrustworthy duo of Faust and Mephistopheles, and, just then, the two of them arrive.

Faust is humbled by the sight of Marguerite's house and sings a tender aria about her "Chaste and pure dwelling." Meanwhile, Mephistopheles produces a box of jewels and leaves them at Marguerite's door. He and Faust hide, as Marguerite comes to sit at her spinning wheel. She's excited to discover the sparkling gems and sings the famous "Jewel Song."

Faust declares his love for Marguerite while Mephistopheles distracts a nosy neighbor named Marthe. After a brief hesitation, Marguerite falls into Faust's arms. The seduction is complete, and as the lovers embrace passionately, the evil laughter of Mephistopheles echoes in the garden.

ACT FOUR: Many months have passed. Marguerite has given birth to Faust's child, but he has deserted her. We find Marguerite in a church, praying for forgiveness. She hears the voice of Mephistopheles, taunting her, and she faints.

Meanwhile, the soldiers have returned from battle. Marguerite's brother Valentin is among them. When he asks after his sister, Siebel tells him she has gone to church. Valentin waits at Marguerite's house, where he finds Faust and Mephistopheles. Mephistopheles sings a lewd serenade, and Valentin demands to know who has disgraced his sister. As Valentin and Faust fight a duel, Mephistopheles intervenes and Faust accidentally kills Valentin. As Marguerite and other villagers rush in, Valentin curses her with his dying words.

ACT FIVE: Mephistopheles presides over Walpurgisnacht, the night when the souls of the dead gather on a mountain top. Faust is haunted by an image of Marguerite. She has been imprisoned for the murder of her child, and he insists on going to her immediately. She's happy to see him at first, and they sing a love duet, but Faust soon realizes that she's losing her mind.

When Mephistopheles emerges from the shadows, Marguerite prays to the angels to save her. Mephistopheles and Faust urge her to come away with them. But Marguerite refuses, and the two men realize they are defeated. As Faust looks on, heartbroken, the angelic chorus proclaims Marguerite's forgiveness and salvation, and her soul rises to heaven.