Accessibility links
Kenny Barron And Eliane Elias In Concert With others and alone, pianist Kenny Barron has a relaxed style that belies his ability to stir up a holy storm at the keys. Most significantly, he spent four years with Dizzy Gillespie in the '60s, leading to work with Freddie Hubbard and Yusef Lateef before he co-founded Sphere. Hear a concert from JazzSet. 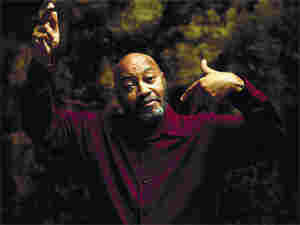 Talk about sophisticated. We're at the 2007 JVC Jazz Festival in the Allen Room of the Frederick P. Rose Theatre, overlooking Central Park and the New York City skyline. Onstage, there are two Steinways, and in the wings wait two elegant pianists.

Dizzy Gillespie hired Kenny Barron from Philadelphia in 1962, and kept him for five years. Later, Barron co-founded the quartet Sphere, dedicated to Thelonious Monk's music. Barron was also the pianist on Stan Getz's last album — just the two of them on People Time. With others and alone, Barron's relaxed style belies his ability to stir up a holy storm at the keys. He begins solo, with an up-tempo "Getting Sentimental over You" from the 1940s, then adds the trio for an Irving Berlin ballad and Barron's own blues. So far, so smooth.

Barron laconically introduces Eliane Elias, who arrives at the second piano with mischief in her eyes, to fast-trade phrases at a flying-home tempo on "The Way You Look Tonight."

Elias comes to jazz from Brazil. When she was still in her teens, the bossa nova composer Antonio Carlos Jobim recognized her talent, and she in turn became one of the best performers of his music. Guitarist Freddie Bryant joins Elias' trio to accompany her Portuguese vocal on "Chega de Saudade," one of the Jobim gems in her repertoire, followed by the sweet and sad "Fotografia."

Barron returns for "Wave," the bossa nova anthem, and the evening is a success. Each pianist has spoken, then lifted the room together.

"Kenny Barron & Eliane Elias Performing on Two Steinway Concert Grands" was produced by Mark Morganelli of Jazz Forum Arts for the 2007 JVC Jazz Festival in New York, with a grant from the New York State Council on the Arts.

Recording by Malcolm Addey with support from Russell Cooper of Jazz @ Lincoln Center.