Accessibility links
U.S. Teams Build Infrastructure in Afghanistan U.S. military looks to a provincial reconstruction team to implement anti-Taliban strategy, including building a road through the most dangerous part of Kunar — the Korengal Valley. 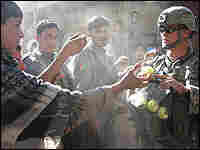 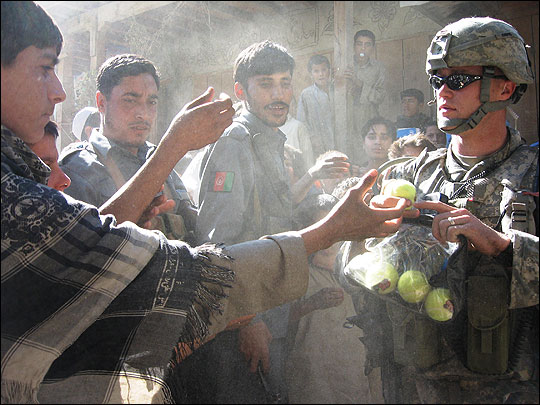 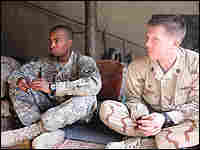 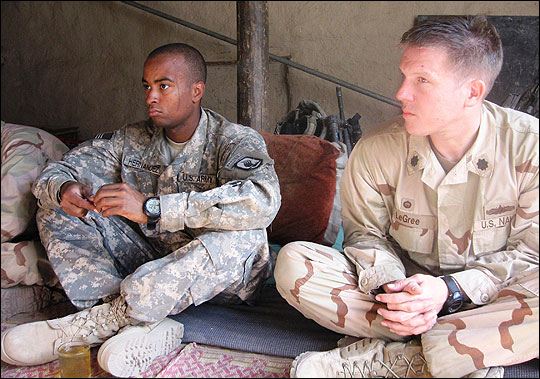 In Afghanistan, northeastern Kunar province is the busiest combat theater in the country for U.S. troops.

U.S. military officers in the volatile region say soldiers recently managed to take out key militant command posts and disrupt their supply lines. But they hasten to add that there is no military solution to the war in Kunar.

Instead, they are looking to a provincial reconstruction team to turn the tide. The team, made up of U.S. service members and civilians, is planning to build a road through the most dangerous part of Kunar — the Korengal Valley.

A U.S. military team in battle gear hikes through orchards and streams at a determined clip. The ranking member is Navy Cmdr. Larry LeGree. He says the team is headed to Omar, a hillside village in the Korengal Valley.

"[Omar is] just the next big population center up the valley," LeGree says. "I just want to get my eyes on how this road will go through here."

The road he is talking about will be humble, by American standards. It will cost $11 million, and will be about 18 feet wide and 26 miles long. But LeGree, who heads Kunar's provincial reconstruction team, says this road could do more to harm the Taliban here than any military action.

"We're not necessarily looking to build fast. We're looking to make an economic impact," LeGree explained earlier from his office at the provincial reconstruction team headquarters. "So, what we are looking to do is provide a lot of employment — and it lines the incentives for what we are looking for, which is a fighting-age male holding a shovel instead of a gun."

Strategy to Win the War

Work on the road begins next month. It will take more than a year to complete and will provide hundreds of jobs for Kunar's largely unemployed population.

LeGree is especially keen on getting the contractor to hire young Korengal Valley men, who might otherwise be lured by the insurgents. He says a regular paycheck will make the young men think twice about risking their lives fighting better equipped U.S. troops.

It's a strategy that LeGree and many other American officers here say is the only way to win the war in Afghanistan. It's a strategy that calls for boosting access and trade to the mountainous country's isolated communities — and building government centers, schools and hospitals. It's a strategy that aims to improve the lives of Afghans and thereby reduce the appeal of the Taliban and other insurgent groups.

LeGree says this approach has already brought vast improvements in Kunar. Newly paved roads have sparked a boom in commerce in the province's Pech Valley. Fighting there has largely stopped.

Success of the Pech Valley Road

Army Staff Sgt. Wayne Amos of Arizona, who provides security for reconstruction-team convoys, says the new road in the Pech Valley also makes it harder for Taliban fighters to plant roadside bombs because they can't be so easily disguised in pavement.

Since the Pech Valley road was built, more than a dozen new stores have sprung up in a village called Nangalam. Vendors sell fresh fruit and goods from major cities that are now accessed in hours, rather than days.

Eager to spur that growth, Bryan Rhodes recently joined LeGree on a trip to Nangalam. Rhodes is a contractor for the U.S. Agency for International Development. With the help of a translator, he brainstorms with shopkeepers on how American money might help.

The vendor says his community could benefit from a flour mill. Rhodes says it's a good idea.

"You don't have to use a lot of power for the flour mill," Rhodes says. "It can be animal driven, it can be water driven."

The reconstruction team gets a warm reception as it moves across the Pech Valley this particular day, suggesting the strategy is working.

Even battle-hardened infantry soldiers like Staff Sgt. Dawayne Krepel embrace the hands-on approach. Krepel, who is on his fifth tour in Afghanistan, says his company recently helped curry favor with residents of Kandagal using the British sport called cricket.

"We noticed them playing when we first moved in ...They built their own sticks, and built their own wickets," Krepel says. "And so we thought in order to get close to the community, we'd set up a cricket tournament. So, we set it up amongst all the villages in the Pech. And we had a great turnout, over like 150 people. It was great. But now every time we come down here, they want cricket balls."

Back in the hillside village of Omar, Krepel's commander, Lt. Kareem Hernandez, introduces LeGree and his provincial reconstruction team to village elders in woolen pakul caps and baggy tunics and trousers.

"Remember we talked during the Shura about some of the projects you want to do in the future? I told you guys the PRT might come and see us," Hernandez says.

The group heads up to the guest house of village elder Ahmanat Khan to talk business over green tea and sweets.

Ahmanat Khan tells the officers he's happy they are building the road to connect the Korengal Valley to the booming communities in Pech Valley. But he avoids answering Hernandez, who presses him on how the Taliban might use the road.

Instead, Ahmanat Khan repeats how valuable the road will be for his people. He says he knows nothing of the Taliban.

Hernandez says he's not surprised. He says most villagers appreciate American help, but not enough to turn in relatives or friends who are in the tree-lined, Korengal hillsides fighting U.S. soldiers.