Accessibility links
Resilience Is a Gift Treating wounded veterans has taught psychologist Joel Schmidt to believe in the resilience of the human spirit. From veterans of World War II, to soldiers returning home from Iraq, Schmidt has been inspired by the way his patients fight to recover.

Listen
Resilience Is a Gift 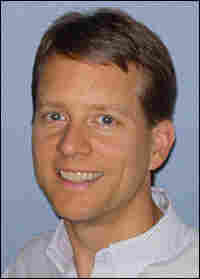 Joel Schmidt is a clinical psychologist at the Veterans Affairs Mental Health Clinic in Oakland, Calif. He is also training director for a psychology internship program in the VA health care system. Schmidt lives with his wife near the San Francisco Bay. Photo courtesy Joel Schmidt hide caption

I listen to people for a living. As a psychologist in the Department of Veterans Affairs, I hear about some of the worst experiences humans have to bear. I have sat face-to-face with a Bataan Death March survivor, an airman shot down over Germany, a Marine who was at the Chosin Reservoir, veterans from every region of Vietnam, medics and infantry soldiers from Afghanistan and Iraq. I have spoken with people who have been assaulted and brutalized by their own comrades, and parents who've had to attend their own children's funerals.

I have gained a surprising belief from hearing about so much agony: I believe in the power of human resilience. I am continually inspired by the ability of the emotionally wounded to pick themselves up and keep going after enduring the most traumatic circumstances imaginable.

Iraq veterans describe to me the constant hell of unpredictable IED attacks and invisible snipers. By the time they get home, many can't drive on the freeway or be in the same room with old friends. One vet described being locked in an emotional cage between numbness and rage.

Emerging from this terrible backdrop, many Iraq vets have surprised me with their drive to recover and their unpredictable ways of giving back some meaning to their lives. For example, there was a veteran whose most powerful therapeutic experience was helping his grandmother keep her small business running. This cause gave him a reason to care, someone to emotionally connect with and ultimately a reason to get up in the morning.

This might sound like naive optimism when in fact treatment is often long and hard, and not every story has a happy ending. Some days when I go home my head hurts. I feel sad or worried or angry or ineffective. On these days, I have to appeal to my own strategies for self-care, pick myself back up and keep going.

I went to school to learn how to help people get better. Instead, it is often the very people I have spent my career trying to help that remind me how to care for myself. I keep a catalog of them in my head and I try to use this list as a road map, an inspiration and a reminder of what human resilience can achieve.

I make it a point to complement the strength and ingenuity of the people who sit in my office. But the truth is, I don't think many of them realize the depth of my admiration. Sitting in the room with these people every day allows me to hope that I might also find strength to face future problems. This solid sense of hope is a gift and it is my humble desire to share it with the next person who sits with me.