Accessibility links
Princeton Sextet Performs Laptop Symphonies The Princeton Laptop Orchestra is a six-person ensemble that performs music via computers. The performers sit on the floor with computers on their laps, with six-sided speakers next to them. They play original compositions written for the laptop.

The Princeton Laptop Orchestra is a six-person ensemble that performs music via computers. The performers sit on the floor with computers on their laps, with six-sided speakers next to them. They play original compositions written for the laptop. 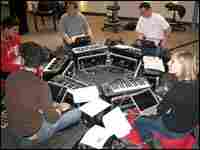 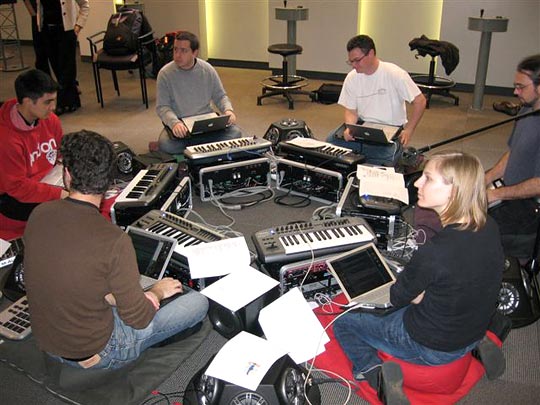 The Princeton Laptop Orchestra in action.

Let's eavesdrop now on an orchestra rehearsal. No cellos. No double reeds. No brass. Instead, enter a room with six computers, several subwoofers and a cluster of hemispherical speakers. We are at the science museum of the National Academy of Sciences in Washington, D.C., which is where a group of Ivy League musicians is attempting to change our ideas about music one key stroke at a time.

My name is Dan Trueman. This is the Princeton Laptop Orchestra. PLOrk is what we call it for short.

Ms. REBECCA FIEBRINK (Princeton Laptop Orchestra member): My name is Rebecca Fiebrink. And I'm a graduate student in computer science. I am in-charge of some marimba happiness and some bass screwing.

Mr. SCOTT SMALLWOOD (Princeton Laptop Orchestra member) My name is Scott Smallwood. And I'm a graduate student in the music department. I, you know, I think I'm wood-peckerish, wood-peckerishness, and bass group three.

Mr. TRUEMAN: Perry Cook and I are the founders of this group. And we're currently figuring out how to set up in this room. So whoever has this thick bass, I don't care for it right now. So everybody round up, put your wood at point four, hit your sink button and make sure it's enabled.

Ms. FIEBRINK: There were flames once during a rehearsal. Scott, were you there for the flame?

Mr. SMALLWOOD: Yeah. Well, I wasn't there, but I know it happened. Somebody plugged something in and pulled it out and the AC jack came out and, and sparked, like, it caused the two terminals to spark together on the metal plate.

Mr. TRUEMAN: We have not had any injuries yet.

Mr. TRUEMAN: Well, I think one of the big problems in technology is that sometimes it's just a big pain, and so nobody wants to do it. This is something that' really fun and different to do with their computers, you know, that they don't usually get to do. So in some ways, it makes the computer a happier place to be than it normally is.

SIEGEL: The Princeton Laptop Orchestra rehearsing in Washington. This is ALL THINGS CONSIDERED.