Accessibility links
WWI Munitions Still Live Beneath Western Front In small French towns along what was once the Western Front, residents still live with the aftermath of the Great War. Demining teams are working to safely remove the unexploded shells and grenades that work their way to the soil's surface. 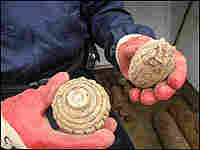 Unexploded grenades and shells from WWI found on the former battlefield of the Somme in northern France. Eleanor Beardsley for NPR hide caption 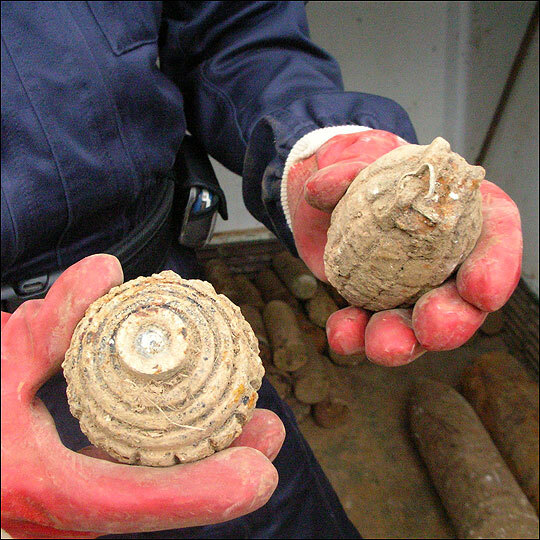 Unexploded grenades and shells from WWI found on the former battlefield of the Somme in northern France. 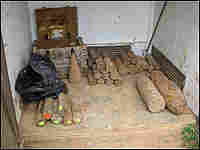 The demining team brings in between 50,000 and 75,000 tons of shells per year. Above is one month's stockpile. Eleanor Beardsley for NPR hide caption 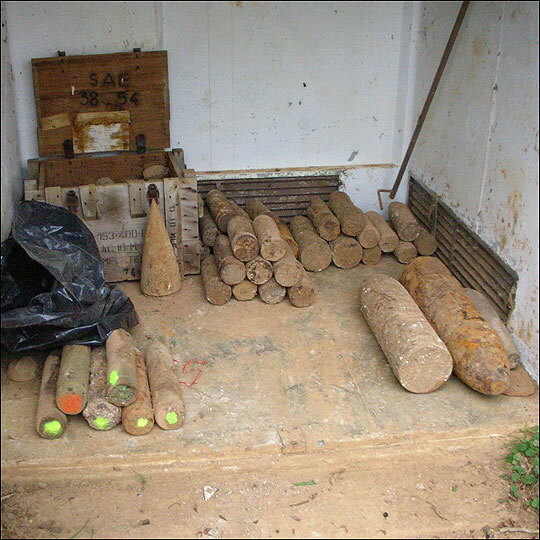 The demining team brings in between 50,000 and 75,000 tons of shells per year. Above is one month's stockpile.

In small French towns along what was once the Western Front, residents are still living with the aftermath of the Great War.

French demining teams are active all over the country, working to safely remove the unexploded shells and grenades that work their way to the surface of the soil.

"People here have grown up with these shells," says Michel Colling, who works with a demining team in the northern city of Amiens. "[Residents] find them all the time and so it's banal for them and they have the tendency to see them as harmless."

Colling's team in Amiens is working near the spot where the Battle of the Somme was fought in 1916. Colling says he always takes a gas mask with him because the mustard gas can be lethal — even 91 years later. He is constantly reminding the local population of the danger.

"These shells are charged and still active," says Colling. "We can't forget that these are weapons that were made to kill people — and they still do."

Two of Colling's colleagues were killed on the job this year when a stockpile of shells exploded.

The Battle of the Somme was one of the largest and bloodiest battles of the First World War. It produced more than a million casualties.

Colline Gellard leads tour groups around the battlefields. Gellard says that many of the shells that did not explode during the war are coming to the soil's surface today.

"We call it the iron harvest..." Gellard says. "There's not many places you can't walk out — in the winter in particular — and pick up old rifles, munitions, shells of all types, grenades, [and] bodies. Sadly, we're still digging up a lot of bodies."

Cemeteries and memorials pepper the countryside of the Western Front. The scars of the trenches still pock the land, though they are now covered with grass.

Michel Colling's next call is a potato field where farmer Xavier Vandendriesche has found a grenade while harvesting his crops. The grenade is round, brown and covered in dirt. It looks just like a potato.

In addition to being a farmer, Vandendriesche is also the mayor of his small village, Courcelette. He says that his village was considered uninhabitable after World War I.

"Everything was destroyed and there were so many shells in the soil," he says. "No one was interested in coming back after the war. Today, only about three families out of 70 are real natives. Welcome to the village of foreigners."

At the end of the day, Colling wraps the shells and grenade in a plastic explosive material that resembles modeling clay. He attaches them to a long electric cable and buries them deep in the ground.

He then moves about 75 yards away and hits the detonator button. The explosion is nothing more than a muffled pop, but smoke pours out of the ground. The shells are now harmless.

About 1.5 billion shells were fired during the war here on the Western Front. Colling and his colleagues bring in between 50,000 and 75,000 tons of them a year. At that rate, they'll have enough work to keep them busy for the next 500 years.