Accessibility links
Newly Released Photos Reveal Lennon's Final Days Photographer Allan Tannenbaum was given rare access to John Lennon just 10 days before the artist was killed. He discusses his decision to wait 27 years to publish the intimate photos he shot of Lennon and Yoko Ono. 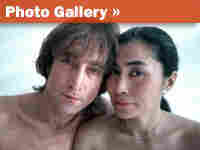 The two met at one of Ono's avant-garde exhibits in 1966. As the story of their meeting has been told many a time, there was a sign that said "Hammer a Nail In."

Lennon asked his future wife if he could follow the instructions, but she said "no," because the show wasn't officially opening until the next day. But the owner of the museum was not having it. He told Ono: "Let him hammer a nail in, he's a millionaire."

Continue Reading About Their Relationship. 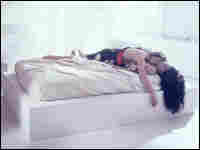 The couple lies together in a SoHo studio made to look like their bedroom. Allan Tannenbaum hide caption 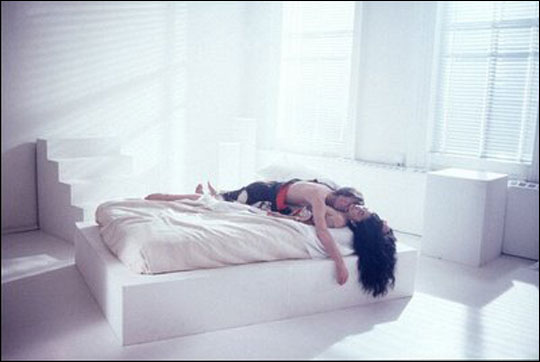 The couple lies together in a SoHo studio made to look like their bedroom.

"These are your photos but just be careful how you use them," photographer Allan Tannenbaum recalls that Yoko Ono advised on a series of intimate portraits he took of her and her husband John Lennon in November 1980. At the time of the conversation, neither had any idea that 10 days later the former Beatle would be dead.

Despite many opportunities in the months that followed to publish the images, Tannenbaum opted to guard most of the pictures until now — 27 year years later. They appear in his new book, Yoko and John: A New York Love Story, a sort of peephole into the couple's final days together.

Initially Tannenbaum, then an employee of the SoHo Weekly News, only planned to photograph the artistic duo in New York's Central Park. While snapping them, however, he overheard something about a shoot for a video promoting their new album, Double Fantasy.

"I kind of invited myself," recalls Tannenbaum, who suggested he attend as a stills photographer.

At first Ono was hesitant. After five years out of the public eye, the couple was just beginning to warm up to the media. Following coffee, however, Ono told him, "John feels comfortable with you so you'll come with us to the studio."

It seemed Lennon was ready to return to the spotlight. "I remember him telling me that when he picked up the guitar for the first time in many years it felt very heavy," Tannenbaum tells Alex Chadwick. "So when he came out and was ready to meet the world it was just very exciting."

Upon arriving in a studio in SoHo where they would be filmed, Lennon and Ono changed from street clothes to colorful kimonos. Eventually, they removed these as well, hopping naked onto a bed and gliding through imitation lovemaking positions.

"I was thinking, I can't believe I am taking these photos," says Tannenbaum.

Nudity was something Lennon and Ono appeared comfortable with: in 1968, they had flaunted their birthday suits on the cover of their Two Virgins album.

As Tannenbaum prepared to deliver the photos to Lennon 10 days later, he was hit with devastating news: Lennon had been killed by a crazed fan.

"I was making prints that I was going to bring up to Dakota that evening," he says, referring to Ono and Lennon's home-office bordering Central Park. "The editor said John Lennon's been shot. I was just in shock."

One month later, Tannenbaum met up with the mourning widow Ono. Once again, his photos show her walking through Central Park. This time, however, there is no smile or husband — just a grimace and cold, white snow.

The two met at one of Ono's avant-garde exhibits in 1966. As the story of their meeting has been told many a time, the show featured a sign that said "Hammer a Nail In." Lennon asked his future wife if he could follow the instructions, but she said "no," because the show wasn't officially opening until the next day. The owner of the museum was not having it. He told Ono, "Let him hammer a nail in, he's a millionaire."

From the get-go, the pair had an unusual way of interacting. They were people of extremes, and falling in love meant being together — constantly — often to the dismay of the fans and band mates who wanted Lennon to themselves. At one point, Lennon had a bed installed for Ono in the Beatle's recording studio, so they would not miss a moment.

Ono was not the princess that many fans envisioned for Lennon. Media accounts were full of derogatory, sometimes even racist descriptions of the quirky Japanese-American artist. Some charged that she had cast a spell on their hero.

"It's not like I'm some wondrous, mystic prince from the rock-'n'-roll world, dabbling in strange music with this exotic, Oriental dragon lady," Lennon told Playboy in 1980, in one of his most extensive interviews. That, however, is what some believed, blaming Ono for breaking up the Beatles and turning one of the world's greatest musicians into a reclusive house-husband interested only in baking bread.

Others saw it differently, though, crediting Ono for Lennon's great music and happiness.

"It is a teacher-pupil relationship. That's what people don't understand ... she's taught me everything I f***ing know," Lennon told Playboy in the interview. 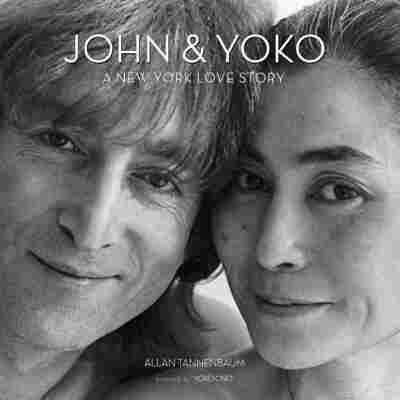