Accessibility links
Charmaine Clamor's 'Jazzipino' Swing Charmaine Clamor grew up listening to Ella Fitzgerald in her native Philippines. So it's no wonder that her brand of jazz (dubbed "jazzipino") combines traditional Filipino instruments, languages and melodies with American grooves.

Songs From 'Flippin' Out' 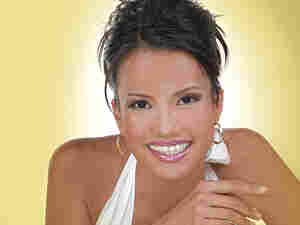 Charmaine Clamor is a jazz vocalist who grew up listening to Ella Fitzgerald on the radio, which shouldn't be surprising. What may be surprising is that Clamor grew up in the Philippines — as a 3-year-old, she sang to passengers on the bus in Manila. Clamor is now a star in her homeland and she's attracting attention in the United States.

Her second CD, Flippin' Out, introduces a hybrid sound, which she calls "jazzipino." Clamor spoke with Liane Hansen about her distinct sound and offered her definition.

"Jazzipino is the new musical genre that results from melding traditional Filipino melodies, languages and instruments with the soul and swing of American jazz," she says.

As a child, Clamor was exposed to Western classical and jazz, as well as traditional Filipino music. She was especially influenced by the kundiman, the Filipino love-song style.

On Flippin' Out, she sings a particularly beloved kundiman called "Dahil Sa'Yo." Clamor's rendition — sung in Tagalog — has something of an ideological edge to it, though. She says that the tune used to be a favorite of the loathed Marcos dictatorship.

"So when I redid this song, I'm hoping if we swing it enough, Liane, that we could rob it from the old ghost of the Marcoses and bring it back to the people where it belongs," Clamor says.

It isn't the only song Clamor flips for her own purposes. She begins the album with an interpolation of Richard Rogers' standard "My Funny Valentine," which she retitles "My Funny Brown Pinay." Pinay is a term for a Filipino woman.

"Since our country was conquered by the Spanish for many, many years, the Filipinos, the native ones, lost pride in their indigenous beauty," Clamor says. "And 'My Funny Brown Pinay' celebrates the unique attributes of an indigenous Filipino woman: someone who has flat nose, black hair, dark skin, brown skin. And this is what I'm trying to communicate to my Pinay sisters."

It is a cause Clamor relates to personally. "When I was growing up in the Philippines, I remember using every type of cream, every type of papaya soap — because we believed that papaya soap lightens the skin — and I used it to hopefully wake up the next day and be fair-skinned," she says.

Her music isn't all political, however. Clamor closes the album with one of her childhood favorites, "Be My Love," rendered partially in Tagalog and dedicated to her mother.

"Whenever I hear Mario Lanza or 'Be My Love' being sung, it just reminds me of my mother and my father, my beautiful childhood when I was growing up in the Philippines," Clamor says.