Accessibility links
Tinariwen: Music's True Rebels In the '80s, the Tuareg people of West Africa rebelled against Mali. The struggle has been violent, but one group put down its weapons to combine traditional music with electric guitars. Hear an interview with one of Tinariwen's guitarists and singers. 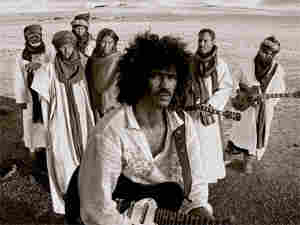 The Tuareg people of West Africa are descended from nomads who traveled in caravans along the Sahara desert. They've been fighting for an independent homeland for decades and in the '80s, the Tuareg rebelled against the nation of Mali. The struggle has often been violent and bitter, but a group of musicians emerged out of the rebellion.

The members of Tinariwen, which translates as "open spaces," put down their weapons to combine traditional musical styles with blazing electric guitars.

Earlier this year, Tinariwen released its third album, Aman Iman: Water Is Life. The band creates a unique sound all its own with blues and African percussion and poetry.

One of Tinariwen's guitarists and singers, Abdallah Ag Alhousseyni, grew up in the desert. It wasn't until 1982, when he went to Algeria, that he heard the music of Tinariwen and legendary desert-blues guitarist Ali Farka Toure.

"It was the first time I heard Tamasheq voices singing with guitars," Alhousseyni says in an interview with Scott Simon. "At home, we didn't have those kind of instruments — just the flute and the tom-tom drum — and for me to hear the guitar and the Tamasheq voices was very moving, very beautiful."

Around the same time, his experience with the guitar was also new and exciting.

Initially, Alhousseyni had a certain resistance to the guitar because of its traditional role with the griot culture's traditional hereditary musicians. But he was attracted to the guitar through other players learning the instrument, and finally in 1986 the barriers came down and he decided to fully embrace the guitar. While electric guitars are not a traditional part of Tuareg life, Tinariwen was a group coming up in the context of rebellion.

"One of the goals of the rebellion was to bring modern things to the desert, to upgrade our lives," Alhousseyni says. "The electric guitar was one of those things we could bring. We found that there was a very natural fit with the guitar and our way of traditionally singing that was just very beautiful and very pleasing."

Still fighting in song, Tinariwen seeks to give its people recognition with the words, music and actions of its members' everyday lives.

"I am not a politician," Alhousseyni says. "We are artists. And yet we live in a time where the Tuareg can't really make these separations as clearly as that. We have to be artists, politicians, nomads, businessmen — everything. I feel that our culture needs to have not necessarily a homeland, but a special consideration within the society. We don't want to just blend into the general population. Our culture is very distinct and must be able to preserve its distinct identity."