'Working All The Time' 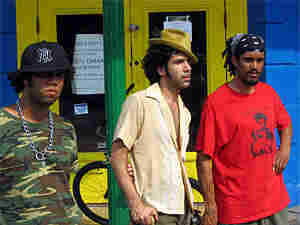 Okay, I confess: Music is a drug, and I'm addicted. But the trouble of making a living out of your habit is this: a yard arm of CDs to get through for a fix. Take The Pimps of Joytime's High Steppin' — probably some more third-rate rap, right?

This is funky. It has it all: soul, funk, punk, afrobeat, rap. I've not heard anything quite like it.

"When all those lines and genres get blurred," says lead singer Brian J, "anything can be soul: rock 'n' roll, punk. It's all soul to me, if it's soulful."

"Its just an aesthetic thing, like an artist painting a painting, you know?" Brian J says. "You ask the cat, 'Yo, why did you put that orange streak on that painting?' You're just, like, 'I don't know, I just felt like it.'"

The Pimps of Joytime's members come from New Orleans and Brooklyn. That explains a lot: Big Easy "Second Line" meets the streets of New York City.

The track "H2O" has Cyril Neville from The Neville Brothers on it. Now, how did they get him?

"He was in Austin, 'cause his house got destroyed in the flood by Katrina," Brian J says. "So I went to Austin, you know, stayed at a Motel 6. I busted out my computer, put the track together, and went to his house, and we just did it. It's funky, and that was that."

Yeah, yeah, I get it. The New Orleans connection to the Caribbean with some Brazilian overtones. It's all making sense — I think?

"Not to mention, if you look at New Orleans and the Caribbean influence there, the Latin music is all inside of that, too," percussionist Chauncey Yearwood says. "So it really all overlaps, and that's what we're trying to show in our music."

Listen to "My Gold," on which West Africa channels Curtis Mayfield: It's nice. Soul roots.

"We just keep digging deeper into the roots of funk, as they say, and soul, which is what we strive to give off as musicians, and where we try to draw from," Yearwood says. "Soul, baby."

"Well, at the end of the day, I hope it just becomes one big thing — big gumbo, a stew of styles," Brian J says.

Well, Pimps of Joytime, you certainly took care of my jones, for today.