Accessibility links
Q&A: Post-Vioxx, Pain Relief Remains Complicated Merck pulled Vioxx off the market in September 2004 after it was revealed that the drug increased the risk of heart attacks and strokes. Here, a look at what has happened since Vioxx was taken off the market. 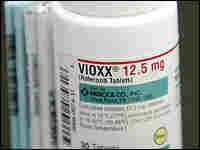 Vioxx was removed from the market in September 2004 after it was revealed that the drug increased the risk of heart attacks and strokes. Joe Raedle/Getty Images hide caption

Merck & Co. said Friday that it will pay nearly $5 billion to end tens of thousands of lawsuits over its painkiller Vioxx. It's one of the largest settlements involving prescription drugs ever.

The company said that people and estates who have already filed lawsuits would qualify if they show proof of a heart attack or a certain type of stroke within 14 days of taking Vioxx.

Merck pulled Vioxx off the market in September 2004 after it was revealed that the drug increased the risk of heart attacks and strokes. Here, a look at what has happened since Vioxx was taken off the market.

Q: What happened to people after they stopped taking Vioxx and related drugs, called COX-2 inhibitors?

According to a large study presented this week at the American College of Rheumatology meeting in Boston, there was a sharp increase (21 percent) in the number of serious gastrointestinal complications in elderly Americans after they stopped taking COX-2 drugs for arthritis.

Q: Why did the rate of bleeding go up?

Vioxx and COX-2 inhibitors were marketed as being gentler on the stomach — and reducing the incidence of bleeding ulcers and other complications. The study showed that just after Celebrex and Vioxx were introduced, the rate of serious ulcer complications started going down in this elderly, arthritic population. That allowed doctors to stop prescribing medications to protect the stomach to people who were taking painkillers on a long-term basis. The study shows that around the time Vioxx was withdrawn from the market, the rate of GI side effects went up again.

Q: What are patients with chronic pain doing now without these drugs?

People largely have been taking non-steroidal anti-inflammatory drugs (NSAIDs). These include the generics naproxen (sold under the brand names like Aleve) and ibuprofen (Advil, Motrin). These drugs have always been associated with significant rates of GI bleeding when taken for weeks or months at a time. Doctors often prescribe a drug called a proton-pump inhibitor to protect the GI system from the damage that NSAIDs and aspirin can cause.

One COX-2 inhibitor remains on the market — low-dose (200 milligram a day) Celebrex. The Food and Drug Administration has placed warnings on the drug cautioning that life-threatening cardiovascular side effects have occurred with related drugs. Some studies have shown that Celebrex at higher doses does increase the risk of heart attacks and strokes. The drug should not be used right before or right after certain heart surgeries.

A generic drug called meloxicam is also available. It isn't a COX-2 inhibitor, but has some of the same benefits as the COX-2 inhibitors. For instance, it is not as hard on the GI system as the NSAIDs.

Q: How safe are the NSAIDS?

There is ongoing research into the cardiac effects of the NSAIDs after a study suggested that people taking naproxen might be at increased risk of a heart attack or stroke. But these studies so far have not found enough evidence of that to send out any alarms.

Q: What's the lesson from the Vioxx episode?

The withdrawal of Vioxx and Bextra from the market led to significant changes in the way drugs are regulated in the United States. The FDA was forced to reexamine how it judged drug safety and to put new procedures into place to protect the public. The episode also caused drug companies to tone down their aggressive marketing of prescription drugs. The marketing campaign for Vioxx and Celebrex came under intense criticism for creating demand for a drug among people who did not need such strong — and potentially risky — painkillers.