Accessibility links
Chasing Fire in the Amazon Earlier this week, NPR's Christopher Joyce reported on an experimental fire scientists set in Brazil to understand how these fires affect climate change. Here, he offers a reporter's notebook on what it's like to chase a fire through a tropical forest.

Listen
Chasing Fire in the Amazon

Earlier this week, NPR's Christopher Joyce reported on an experimental fire scientists set in Brazil to understand how these fires affect climate change. Here, he offers a reporter's notebook on what it's like to chase a fire through a tropical forest.

Earlier this week, NPR's Christopher Joyce reported on experimental fires that scientists set in Brazil. They were trying to understand how these fires spread; how they contribute to global warming.

Here's his Reporter's Notebook, and what it's like to chase a fire through a tropical forest.

CHRISTOPHER JOYCE: It's the first time I have put on snake guards to cover a story. They slide over your foot and cover you from shoe top to knee. Lots of rattle snakes, one scientist says. I wonder whether knee-high is high enough.

A team of Americans and Brazilians organized by the Woods Hole Research Center in Massachusetts was going to set fire to a patch of Amazonian forest. They admit they are fire lovers, but they're doing this in the name of science, and they are a little crazy, too.

A young Brazilian walks with a tank of fuel strapped to his back and a fire-spitting wand connected to it. He drags the wand in the leaf litter alongside a cleared path and the flames crackle to life. The fire creeps across the forest floor. The flames climb vines and turn some trees into torches. The heat makes you gasp for breath.

At night, the forest glows with the ribbons of orange fire. The scientists plunge through the brush, mapping where the fire travels, measuring humidity and wind speed. We wear headlamps and look like miners lost in the woods. Every now and then, a gigantic flying insect whacks you in the face.

As a science writer, I often watch carefully crafted experiment in sparkling laboratories, but this seems like havoc. Team leader Jennifer Balch admits it does look messy.

Ms. JENNIFER BALCH (Researcher, Yale School of Forestry and Environmental Studies): Our methods are pretty rudimentary because we're only capturing some of these phenomenon, but it's very exciting when we're actually, like, yes, that's exactly what's going on. That's what's happening here in this forest.

JOYCE: Capturing phenomena is just collecting data. This team knows that once this forest is ashes and debris, they'd better have some new answers about fire in the Amazon. That's why they're willing to spend 14-hour days in a furnace, dodging snakes and breathing smoke.

By the third day, everyone smells like a dirty fireplace. Don't forget to check for ticks, someone says. We head to a farm pond; a big ochre sun hangs near the horizon. We bob in the water like singed corks, hoping that all the measuring and mapping will somehow assemble itself into some revelation about fire in the Amazon.

To Slow Amazon Fires, Scientists Light Their Own

To Slow Amazon Fires, Scientists Light Their Own See a slideshow of fires in the Amazon 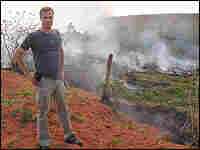 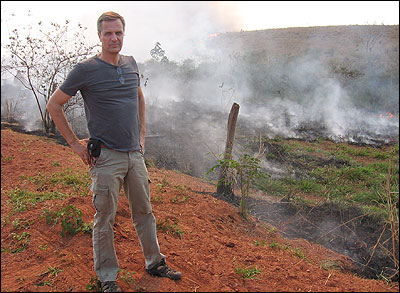 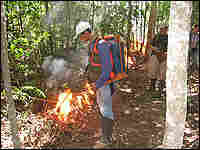 A member of Nepstad's team helps set a fire in a control patch of forest in the middle of a giant soybean farm. Christopher Joyce, NPR hide caption 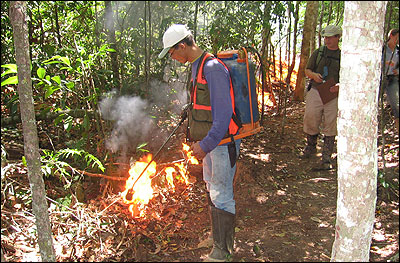 A member of Nepstad's team helps set a fire in a control patch of forest in the middle of a giant soybean farm. 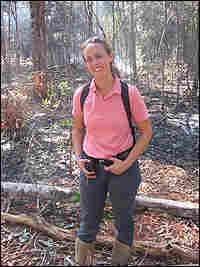 Jennifer Balch of Yale University admits fire can't be eliminated from the Amazon; farmers need it to survive. But her team is trying to figure out how to keep fire from spreading into the protected forests. Christopher Joyce, NPR hide caption

A few months ago, a team of scientists walked into a stretch of Amazon forest and purposely burned it. The scientists want to understand how burning forests contribute to climate change — and they want to know how to slow or stop those fires.

But fire is everywhere in the Amazon. It's the way people clear land for agriculture and livestock. It also burns down a lot of forest that isn't meant to be cleared.

A patch of isolated forest in the middle of a giant soybean farm on the southern edge of the Amazon basin was set aside just for this experiment. Ecologist Dan Nepstad of the Woods Hole Research Center in Massachusetts is the project's mastermind. He has a theory.

"Fire begets fire," he says. "Once a fire goes through a forest, trees die. It becomes more susceptible to further burning."

But there's much more at stake than just these forests. What happens to them affects both the local and the Earth's climate. Nepstad says the more the forests burn, the more carbon goes up into the atmosphere. That contributes to global warming. At the same time, global warming seems to be making the Amazon drier and more prone to burning. And Nepstad says the world can't do without these forests.

"The Amazon is like a giant air conditioner," he says as his crew starts lighting the leaf litter along the edges of the fire lines. It's like the way people sweat when they're hot. Moisture is drawn up through the trees and leaves and then into the air, which cools the atmosphere. But the forest can't do that very well during droughts. And global warming could make droughts worse.

That's why 30 researchers are now darting though this smoking forest. They've covered their faces with bandanas and carry notebooks. For three days they'll set fires, map how the fires spread, count the trees that die and those that live. Some crew members are local farmhands, others come from American universities.

Jennifer Balch from Yale University's School of Forestry is in charge of the burn this year. She reassures the crew that she's well prepared — lots of pencils and snake bite kits.

Crewmembers hoist fuel canisters onto their backs. The fuel is forced into a flaming wand. They drag the wand through the leaf litter and the fire catches, crawling across the forest floor. Balch and her team race ahead of the fire. They collect dead leaves, measure their moisture content and calculate wind speed and relative humidity.

They also want to know how much carbon is in the leaf litter and dead branches — the "biomass" that a fire consumes. Half the biomass is carbon. They calculate how much biomass is in the plot before the burn, then again afterwards.

"The difference," says Balch, "gives us the amount of carbon that goes from these types of under-story fires immediately to the atmosphere through combustion."

All told, it's a lot of carbon. A big tree here stores about 1.3 tons of carbon. Worldwide, the cutting and burning of forests contributes about one-fifth of the carbon going into the atmosphere.

The fire burns overnight — a surprise to the scientists. Usually the humidity rises at night and puts the fires out. In other places the flames do stop, though. Sometimes it's as simple as an ant trail — a natural fire-break created by leaf-cutter ants — that sweep the ground as clean as new asphalt.

After three days, it's clear the fires are burning hotter and faster than ever before, especially in a plot that was burned once three years ago and then left alone. Nepstad is pleased with the results — as much as he can be as he watches a forest burn.

Fire begets more fire, just as he suspected. And one reason is the grass.

Where grass has invaded the forest, the fire explodes. Fleeing insects smack you in the face. Hawks gather along the edge of these hot fires, waiting to pounce on escaping animals.

Nepstad says grass follows people, when they log the forest or burn it to make room for crops.

"All these things converge into what we call a brush-land scenario," Nepstad says. "We believe by the year 2030, half the Amazon will be cleared or severely damaged by either drought, fire or logging."

And if the brush-land scenario comes true, he adds, that means more fires will affect the Earth's climate. "If we have 250 billion tons of carbon in these ecosystems stored," he says, "and they're currently a fifth of the annual flow of carbon to the atmosphere, that's going to get worse. It could be big enough to undo the gain we get from lowering emissions from industry and cars elsewhere in the world."

Yet the scientists here know they can't eliminate fire in the Amazon. It's a tool that people have always used to sculpt their environment, Balch says.

"It can be argued that human evolution was facilitated by capturing fire as a tool," she says.

Brazilian law requires landowners in the Amazon to keep up to 80 percent of their land in forest. But out-of-control fires eat up a lot of that. The task in the Amazon is Promethean: figure out how people can harness fire to clear the land they need, but keep fire out of protected forests. Otherwise, fire will consume the Amazon and change the climate.