Author Ken Wells layers his new novel with love, corruption and Cajun cuisine. Jacki Lyden talks with Wells about Crawfish Mountain, a story about big oil and the Louisiana wetlands.

This is ALL THINGS CONSIDERED from NPR News. I'm Jacki Lyden.

Author Ken Wells calls his new novel a gumbo Western in which characters fight over saving Louisiana's coastal marshes instead of the open range. There are love affairs, double crosses, gun play, fist fights, a chase scene on horseback dastardly bad guys, and a whole lot of beautiful scenery. Then there's a lot of serious business on the effects of oil exploration and drilling on the ecosystem of the Cajun Coast.

Ken Wells has been on this show before with an earlier Bayou novel, and he is from Bayou country himself. Welcome back to the show, Ken Wells.

Mr. KEN WELLS (Author, "Crawfish Mountain: A Novel"): Jacki, thanks for having me.

LYDEN: We forgot to say the name of this new book. It's called "Crawfish Mountain."

LYDEN: Let's talk a little bit about "Crawfish Mountain." I'd like to know something about the story. Can you introduce it to us and then maybe read us a little something?

Mr. WELLS: Oh, absolutely. The basic plot is a Cajun workingman named Justin Pitre - he's a decent mechanic - and his beautiful wife Grace Jeremi(ph) Pitre. They inherit from his trapper grandfather this beautiful place called Crawfish Mountain. And it's called Crawfish Mountain because it's a chenier and in the flatlands of the prairie lands of Louisiana. Cheniers are these natural alluvial mountains that were formed over millennium of flooding. And so Papa Jack Pitre, Justin's grandfather, back when the marsh was not worth so much, paddled up at this place one day, climbed to the top of the chenier, realized that it would be almost hurricane-proof. It was so high, and it had the prettiest view in all of South Louisiana.

LYDEN: Take us into this beautiful place. Why don't we begin where you do, in the chapter called, The Origins of Paradise, and this is a letter that Grandpa Jack is writing to his grandson, Justin Pitre, who's one of the heroes of the book.

Mr. WELLS: (Reading) To my grandson Justin Pitre, I know I probably don't need to say this, but don't let nobody mess with our marsh and our swamp. A lot of that prairie out around us is going to hell and sinking, but our land is good because we always kept it just the way God made it. Don't sell the camp to nobody neither no matter what they say they'll give you. I never told you, but I had more offers to sell that place than crawfish got legs. When I first paddled around our island all them years ago, I knew there were things about that place than money can't buy. Your papa who loves you, Jack Pitre.

LYDEN: And, of course, Ken Wells, the basic premise of "Crawfish Mountain" is that the oil company, specifically one guy, one villain, is trying to take it away and dredge a pipeline through the land that we just heard about. I have to say he's a lot of fun for a villain, Tom Huff of Standard of Texas Oil, as you put it.

Mr. WELLS: Yeah, Huff, you know, some people would think he's a stereotype, but I think he's an archetype of the kind of anti-Cajun, oil guy who was down there in the '50s and '60s and '70s. He hates the climate. He hates all these foods with French names like (French spoken) and gumbos and (French spoken). You know, he's a libertarian. He reads Iron(ph) (unintelligible) and he reads the Wall Street Journal's editorial page as religious doctrine - although he thinks they're too soft on the bad guys.

Mr. WELLS: And his whole goal in life is to basically pump oil out of the ground however he can do it and sell it at exorbitant prices for the good of the company.

LYDEN: In all seriousness, you've done extensive reporting in your years at the Wall Street Journal - never mind the editorial page. You wrote a very big piece just a couple of years ago about the effects of oil exploration on the Bayou. Tell us a little bit about it. First of all, is it called the Cajun glades or is that a term you invented?

Mr. WELLS: I sort of invented that term. One of the problems with what I now call either the Cajun glades or the Cajun Coast is that unlike the Everglades to which I often compare it, it simply does not have a unifying name. And it's, you know, it's the seventh largest weapon on earth, and it's still perhaps the most productive weapon in all of North America outside of - but the fisheries catch us in - from the Cajun Coast towards Chesapeake Bay, and it's bigger than anything outside of Alaska. But the wrinkle for our coast is that we are arguably the most industrialized weapon in North America as well.

And, for better or worst, they found copious amounts of oil and gas under us. And in the early days, the oil companies came in there and they saw all those serpentine bayous. And they said it just takes too long to go through all those curves, and they began cutting these elaborate systems of beeline canals. And I've seen an estimate that they carved up 80,000 miles of these canals throughout the system, and this has allowed saltwater intrusion into systems that would have had been fresh water before. And the minute that you get that and especially when you get that long term, you begin to get giant diet off of the freshwater marshes and the swamps.

LYDEN: Given that that is all very, very serious, why did you decide to turn this novel into a comic romp?

Mr. WELLS: Well, because I wanted people to read about it, you know? I didn't want it to be a sermon.

LYDEN: I have to say, I could hear you laughing out loud describing some of this. Governor Joe T. Evangeline is set adrift in a little pea rowboat, trying to catch red fish, wondering why in this most red fish-loving of all states, he knows nothing about catching one. The Pitres becomes fugitive. The evildoer Tom Huff falls for a woman named Daisy who won't take off her girdle. Do people really say things kind of sounds(ph)like he's been on my back like a second-week case of mange?

Mr. WELLS: You know, I think, well, you know, the thing about…

LYDEN: That's one of the ones I can repeat for a family radio show.

Mr. WELLS: Right. Well, the reality of being anomalous in South Louisiana is that you have a great deal of competition from reality. You know, the stuff that happens down there and the way people speak, you know, is almost always going to be more interesting than the stuff that you can make up.

LYDEN: With all these different plot lines, does it turn out well in the end? Do they save the marshes?

Mr. WELLS: Well, I'm an optimist. You know, and I am not willing to give up either on the political system or on my estuary which I love so dearly. And there's nothing to me more exquisite than going down a bayou around sunset and coming around the corner and there's a bull alligator crossing, you know, the bayou and then you come upon egrets and ivises and even bald eagles soaring overhead.

You know, it's a stunningly beautiful and hauntingly, sort of romantic place. And, you know, it's worth saving.

LYDEN: Well, Ken, with the help of characters like Boogie(ph) and Croc(ph) and Ti-Ray, I'd say that you've contributed a whole novel to this effort.

Thank you so much. Ken Wells is the author of a new novel called "Crawfish Mountain. 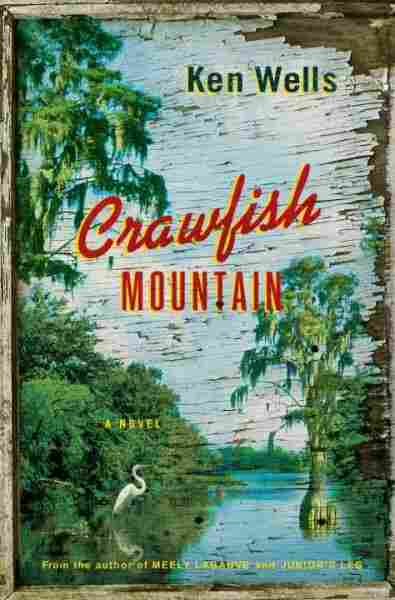