Accessibility links
Stagehand Strike Shuts Down Broadway Shows More than two dozen shows on Broadway went dark Saturday, as stagehands — who have been engaged in a bitter contract dispute with producers — went on strike. No new negotiations have been scheduled.

More than two dozen shows on Broadway went dark Saturday, as stagehands — who have been engaged in a bitter contract dispute with producers — went on strike. No new negotiations have been scheduled.

Charlotte St. Martin, president of the League of American Theaters and Producers, says the strike couldn't come at a worse time of year. 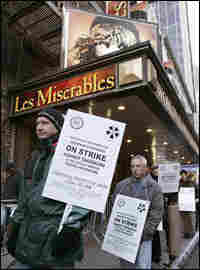 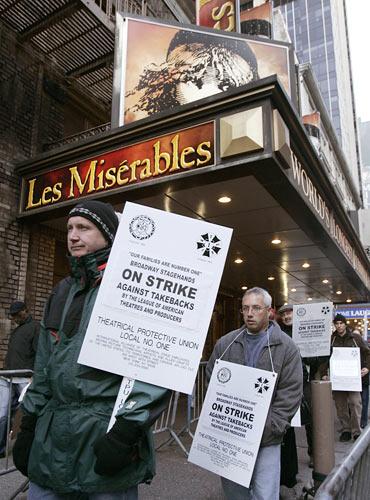 Broadway stagehands walk a picket line Nov. 10, 2007, in front of the Broadhurst Theater in New York.

After months of bitter negotiation, Broadway's stagehands went on strike Saturday, shutting down most shows on the Great White Way.

At about 10 a.m., the picket lines started appearing in front of Broadway theaters. Charlotte St. Martin, who represents the producers, said the stagehands really knew how to hit Broadway where it hurt.

"The first show they chose to strike was How the Grinch Stole Christmas," St. Martin said. "And we realized that it was just very appropriate that that's the first one that they would do it for, because they are like the Grinch, stealing the magic of Broadway to all the children and families who are here to see Broadway shows and to kick off their holiday season."

Of course, who the Grinch is, is up to interpretation. Broadway's stagehands — the backstage workers who install and operate the sets, lights and props in theaters — have been working without a contract since July. Negotiations have been tense and have broken off a couple of times.

The dispute is over long-established work rules which the producers say are archaic and expensive. Officials of Local One, the stagehand's union, would not speak to the press, but handed out leaflets to Broadway patrons saying "theater owners and producers are demanding a 38 percent cut in our jobs and wages."

But try telling that to the thousands of patrons who came to New York to catch a Broadway show this weekend, like Emily Weissberg from Raleigh, N.C.

"We were planning to see The Drowsy Chaperone for my mother's 50th birthday, that I planned over a month ago," Weisseberg said. Asked how she felt about the strike, she said, "Really angry."

In all, 28 shows are affected by the strike, including some of Broadway's biggest hits, like Wicked, Hairspray and The Phantom of the Opera. Eight shows will continue to perform - among them Young Frankenstein and Mary Poppins - because they play in theaters that aren't covered by the expired contract.

"We just opened last night," he said. "We had a fantastic opening, great notices, and we wake up this morning to find out that [there will] be no performances. We have four shows scheduled for today and 6,000 people were coming to the theater and it's very, very disappointing that we have to turn them away."

And some smaller shows could even close, said St. Martin, of the League of American Theaters and Producers.

"Certainly, the shows that don't have advance sales or who are teetering on even breaking even will be challenged by a lengthy strike," she said.

And many other businesses will be affected, from hotels to restaurants to parking garages — an estimated $17 million a day. As curtain time for the matinees approached, the cast members of Broadway's shows assembled in front of theaters in solidarity with the stagehands.

Tony winner and television star David Hyde Pierce stood under the marquee of the show he's starring in, Curtains.

"We're here to support our fellow workers in the stagehand's union, first of all, because these guys literally have our lives in their hands every night," the actor said. "And we're also here because we hate strikes and we think this is a terrible way to do business."

Unfortunately for Hyde Pierce and his fellow cast members, no new negotiations have been scheduled between the stagehands and producers, so the curtain won't raise on Curtains in the near future.