Accessibility links
High Oil Prices Affect Many Products Oil prices are soaring to levels never anticipated – nearly $100 a barrel. The price of oil affects just about everything that is made, transported, eaten and sold in the United States. But the cost hasn't had the impact on the economy many analysts expected.

The price of oil affects just about everything that is made, transported, eaten and sold in the United States. But with oil approaching $100 a barrel, the impact on the U.S. economy has been less than many analysts expected.

Time and again, economists from Alan Greenspan on down have warned that higher oil prices are inflationary. They make it more expensive to drive, to buy an airplane ticket and to manufacture anything from air conditioners to zippers.

Despite that, the economy grew at an annual rate of 4.9 percent last quarter. That's been a surprise to Jay Bender, president of a South Dakota injection-molding company. NPR interviewed him in January 2003 when oil sold for $32 a barrel. At the time he worried that rising oil prices would make raw materials more expensive.

"That's going to be a challenge and if it does squeeze our bottom line too hard, it will have an impact on our ability to invest in capital equipment and grow our business," Bender said in 2003.

Today, he says, the cost of raw materials has increased, but "I would say probably not as much as I thought it would and maybe what I was forgetting [in 2003] ... is when these costs go up they impact my competitors as well."

So, how is his company doing now?

"We're doing well," he said. "I would say it's the same scenario as three or four years ago that our sales are continuing to increase, our top line is good, we just set a sales record in August and we broke it again last month in October."

Bender said he has survived because by becoming more efficient, fighting back against higher prices and passing on some increases to customers.

Economist Ken Goldstein of The Conference Board, which compiles the Consumer Confidence Index, said what's happened to Bender is happening across the economy. He said it may not look like it when you see all those SUVs but the U.S. is more energy efficient than it used to be and alternative fuels are more widely available.

Goldstein believes the days of relatively painless price increases are ending. A lot of things are getting more expensive.

"For example, the price of some of these sports drinks hadn't increased in seven years. It did this summer and precisely because the price of transporting that stuff by truck to the supermarket to the grocery store got more expensive to the point where they had to go for a price increase," he said.

Goldstein says there is always a lag between the time when oil goes up and the time its impact is felt in the economy.

When it does, he said, gasoline could hit $4 a gallon.

That's bound to be felt by consumers. Whether they stop spending will depend partly on other factors, such as how well the housing industry and the job market do. But the past few years have shown that the economy can adjust to rising prices better than people once thought. 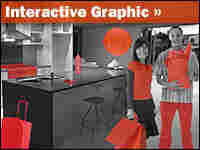 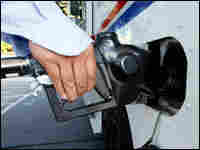 As the price of oil nears $100 a barrel, expect to pay more at the pumps as well as to fly, to mail packages and to heat homes. Justin Sullivan/Getty Images hide caption

The average price for a barrel of crude for all of 1980 was more than $93. It's taken more than a quarter century, but oil prices are once again approaching that level. hide caption

The average price for a barrel of crude for all of 1980 was more than $93. It's taken more than a quarter century, but oil prices are once again approaching that level.

A Guide to What's Different, and What's Not, as Oil Prices Once Again Approach Record Highs

Oil prices are nearing $100 a barrel these days. Prices have more than quadrupled since 2002 and seem to be heading in only one direction: up. The higher oil prices affect everyone from a factory worker in China to a farmer in Iowa. The global oil industry is vast and, at times, confusing. Here are some questions — and answers — raised by the recent spike in oil prices.

Why have oil prices risen so steeply? Is there a single reason?

There are many reasons, analysts say, ranging from a weak dollar to tensions between the U.S. and Iran. At the heart of the problem, though, is the fact that global demand is currently outstripping global supply. Countries such as China and India are thirsty for oil to fuel their economic growth, yet the world's oil-producing regions are producing less oil. In Nigeria, tensions in the Niger Delta region have curtailed production by nearly a million barrels a day. Fears of war between the U.S. and Iran, one of the world's biggest oil producers, have driven up prices further. And some of the world's major oil fields — the Cantarell Field in Mexico, for instance — are yielding disappointing amounts of crude oil this year, for geological, not geopolitical reasons.

Not necessarily. Most of the world's oil producers are already working at full capacity, pumping every barrel of oil they can. Only one country in the world, Saudi Arabia, has excess production capacity — and no one but the Saudis knows exactly how much excess capacity.

What about tapping into new oil reserves?

That's always a possibility, but it's not clear where the most promising reserves lie — and some regions, such as the Arctic National Wildlife Refuge, are environmentally sensitive. In any event, it takes many years before a newly discovered oil field can begin producing crude.

What is the immediate impact of higher oil prices for consumers?

Expect to pay more at the pumps, of course. But the pain doesn't end there. Airlines are already adding fuel surcharges to the price of tickets. Delivery companies such as Federal Express and U.P.S. are also charging more. Heating oil will cost more this winter (especially a problem in the Northeast.) Food costs also rise in tandem with oil prices, since farmers spend more on fuel for their tractors and other equipment, and transport costs also rise. Even the price of plastic goods might increase, since plastic is a petrochemical product. Economists worry about a "ripple effect": As people spend more on gasoline, heating oil and other staples, they have less money available to spend on other items. Consumer spending accounts for two-thirds of all economic activity.

So might higher oil prices tip the economy into recession?

It's possible — that's what happened in 1973 — but most economists say it's unlikely this time. One reason is that the U.S. economy has shifted from a largely manufacturing to a service economy, and therefore our energy needs (as a percentage of GDP) are lower. Also, cars and airplanes are, overall, significantly more efficient today than they were 35 years ago. True, other economic liabilities — the fallout from subprime mortgages, a weak dollar — don't help matters, but high oil prices alone aren't likely to cause a recession, economists say.

With oil so expensive, somebody must be making a lot of money.

Yes. The oil companies are doing very well, but not equally well. Companies that specialize in withdrawing crude oil from the ground are making the most money. Those that also refine the oil into gasoline (and other products) are earning slightly less money, since the cost of refining has increased recently, as companies shut down portions of refineries for maintenance and repairs in anticipation of winter demand.

Exxon-Mobil, the world's largest publicly traded oil company, recently reported a profit of $9.4 billion. Impressive, but not quite as impressive as the $10.5 billion it reported a year earlier — more money than any publicly traded company has made in U.S. history.

Which countries are benefiting from higher oil prices?

The traditional big-oil producers, such as Saudi Arabia, Kuwait and other Persian Gulf nations, but also relative newcomers to the oil game, such as Kazakhstan and other nations that border the oil-rich Caspian Sea. Iran, Russia and Venezuela are also big winners. Higher oil prices might embolden leaders of those nations to play a more assertive role on the world stage and, in the case of Iran, deflect international pressure to dismantle its nuclear program.

And the countries that suffer?

Any nation that is a net importer of oil, such as the U.S. and most European nations. The European pain, however, is blunted by the strong Euro and Europe's fuel-efficient transport systems. China is another loser. It's appetite for oil is seemingly insatiable, and it's already paying more for that addiction. India is potentially even more vulnerable: It uses less oil than China but imports 70 percent of it, compared with 50 percent for China.

How high can oil prices get?

Technically, there's no limit. The market determines the price. A few analysts foresee oil prices climbing to $120 or even $150 per barrel in coming months. Eventually, though, the law of supply and demand will kick in and prices will fall, especially if consumers begin to cut back on the gasoline they consume (something that hasn't happened yet). Some analysts call the current price spike an "oil bubble," one that will pop sooner rather than later. Also, oil prices are cyclical. They tend to go up in the autumn as people stockpile supplies for the winter and then fall again in the spring.

Some environmentalists certainly think so. With oil so expensive, developing alternative energy becomes a much more attractive proposition. In fact, some proponents of cleaner energy sources are openly rooting for oil prices to keep going up, up, up.