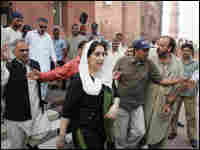 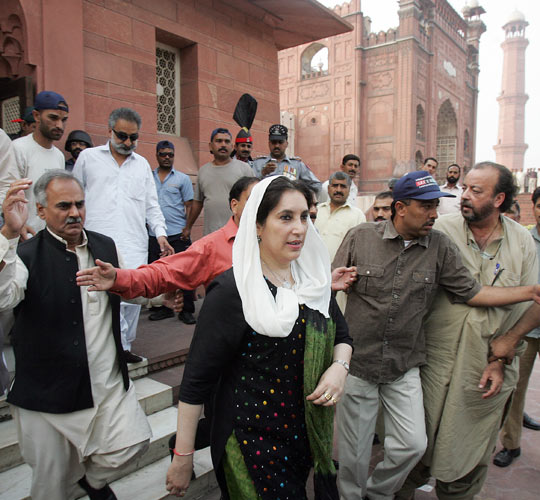 Bhutto, a former prime minister, was due to depart from the eastern city of Lahore on Tuesday morning for the capital, Islamabad, 185 miles away. The journey was expected to take about three days and her party said thousands of supporters were expected to join her en route.

"All processions, rallies, political gatherings at present are outlawed," Deputy Information Minister Tariq Azim Khan told The Associated Press. "So if she breaks the law, then obviously she will not be allowed to do it."

Bhutto and other opposition members have threatened to boycott upcoming parliamentary elections unless the restrictions imposed by Musharraf come to an end and he resigns as army chief.

Musharraf has said he would stick to a January schedule for the polls, but set no time limit on emergency rule, which has resulted in the arrests of thousands of his critics, a ban on rallies and the blacking out of independent TV networks.

The measures, he argued, were necessary to ensure "absolutely fair and transparent elections" and to step up the fight against Islamic militants threatening Pakistan.

Bhutto was targeted in an Oct. 18 suicide attack during her homecoming from exile. The attack in the southern city of Karachi killed 145 other people. She was briefly placed under house arrest by Musharraf's government but was released after protests from the United States and other nations.

Other opposition parties were considering a poll boycott.

"Under the current circumstances, it is very difficult to expect there would be fair elections in the country," Raja Zafarul Haq, chairman of the party of former Prime Minister Nawaz Sharif, told the AP. "Within the next week, there will be meetings and we will finally decide whether to go for elections or agitation."

Liaqat Baloch, secretary general of Pakistan's most popular Islamic party, Jamaat-e-Islami, said members of his party were strongly considering boycotting the elections. "If there is an emergency and no constitution, it is impossible to have free and fair elections," he told the AP.

In Lahore, about 200 police were guarding the house where Bhutto was staying, with snipers on surrounding rooftops. The access road was blocked by steel barricades.

When she ventured outside into the city, dozens of police vehicles escorted her.