Accessibility links
Homeless Veterans Tell of Service, Life on the Street In commemoration of Veterans Day, homeless veterans share their stories and how they are hoping to get off the street. They also explain their service to the country and what Veterans Day means to them.

Listen
Homeless Veterans Tell of Service, Life on the Street 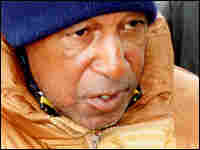 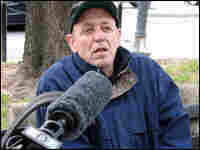 Chuck Ebner says he was homeless for five to six years. Will Wright, NPR hide caption 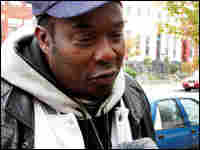 Report on Homelessness Among Veterans

In commemoration of Veterans Day, homeless veterans share their stories and how they are hoping to get off the streets. They also talk about their service to the country and what Veterans Day means to them.

Chuck Ebner "reluctantly" served in the Vietnam War. The formerly homeless veteran describes the five years he spent on the streets as "heartbreaking." Ebner says of Veterans Day and the war in Iraq, "I wish we never had to have another veteran."

Joe Williams served 16 years in the U.S. Army. Williams became homeless after being downsized by the Atlanta company he was working for. He later relocated to Washington. As for the holiday, Williams says, "Veterans Day is very important ... It is an honor to serve in the military."

John B. King, Jr., served in Korea and cites a professional career of more than 35 years in service to the federal government. He became homeless after losing his house in a domestic altercation. When asked to share his thoughts on what Veterans Day means to him, King says, "I want to sit down and cry ... what else can I do?"

Keith Michael Robinson served 12 years in the U.S. Navy and admits he likely suffers from post-traumatic stress disorder. After battling substance abuse, Robinson says "an inability to grasp responsibilities" led him to a life on the street. The veteran admits to having been too proud to ask for help.

Ronald Brisbon is a Persian Gulf War veteran. After suffering a heart attack, Brisbon says he was no longer able to perform manual labor, which was required in his former job. He later lost his job and, as a result, his job-sponsored health benefits. Brisbon now spends his time researching benefits that might be available to him through the Department of Veterans Affairs.

Written and produced for the Web by Lee Hill.