Accessibility links
Study: Brains in ADHD Kids Mature Later A new study using brain scans shows that a part of the brain that controls action and attention matures later in children with ADHD. The study may also explain why many kids grow out of the disorder. 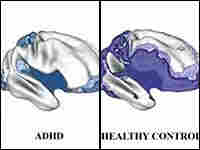 A composite comparison of an ADHD brain (left) with those of a normal brain shows that regions in the middle of a brain develop much later in children with the disorder. Light blue in the ADHD brain corresponds with light purple in the control brain. NIMH Child Psychiatry Branch hide caption

A composite comparison of an ADHD brain (left) with those of a normal brain shows that regions in the middle of a brain develop much later in children with the disorder. Light blue in the ADHD brain corresponds with light purple in the control brain.

A new study may explain why about half the children diagnosed with attention-deficit hyperactivity disorder (ADHD) seem to grow out of it by the time they're in their 20s.

The study, published in the online edition of the Proceedings of the National Academy of Sciences, found that some brain regions in children with ADHD tend to mature later than normal.

Scientists hadn't realized this before because they usually rely on MRI scans of the brain that are like single snapshots — they only capture what's happening at a particular moment in time.

But for this study, a team at the National Institute of Mental Health used multiple snapshots of a child's brain taken at regular intervals as he or she grew up. They assembled these snapshots into time-lapse movies.

"You can see a wave of brain maturation going from this middle line," says lead author Philip Shaw, pointing to an animated brain image on his laptop. "The last bit to mature are these bits in the middle, which are important for the control of action and attention."

Action and attention are key functions that are disrupted in children with ADHD.

Shaw's team studied more than 400 children — half of them with ADHD. The team measured changes in the thickness of the brain's gray matter, or cortex. Shaw says that for all the kids, the cortex followed the same sequence of change.

"It starts off relatively thin in early childhood," he says. "It gets thicker, then reaches its peak cortical thickness, and then it gets thinner throughout adolescence."

But Shaw says that when they compared the time-lapse images from the two groups, the timing of these changes was different.

"The big finding was the difference in the age at which they reached this milestone of peak cortical thickness," he says. "The healthy kids had a peak at around age 7 or 8, the kids with ADHD a couple of years later around the age of 10."

The delay in this developmental milestone was most apparent in the area of the brain that controls action and attention.

Judith Rapoport, another scientist involved in the study, says the scans showed that the brains of many of the kids with ADHD did eventually catch up.

"It's long been known that some kids, even if they seem very hyperactive and are a lot of trouble in early grades, seem to grow out of it and do extremely well, as their grandmother said all along they would," she says.

But Rapoport says it's not clear from the scans why some kids with ADHD continue to have problems. Researchers suspect it's because their brains remain immature.

Rapoport says teachers, doctors and investigators could do more for these children if they were able to identify them at the earliest possible age.

"If we could know earlier on in the game which are the children who are going to grow out of it one could reassure the parents," she says. "We could take all those resources that are being wasted, apply them to the ones that are not going to do as well."

The clues may come from studying the brains of infants — something this study didn't do. Nearly all of the children in the study were at least 5 when they had their first MRI. Younger kids are hard to diagnose and less likely to lie still for a brain scan.

Stewart Mostofsky of Kennedy Krieger Institute in Baltimore says researchers need to find a way to look at younger brains.

"The real important question is what is happening earlier in brain development and brain maturation that is contributing to the onset of the disorder," he says.

Mostofsky says that may involve events that occur before birth.

See an animation comparing development in an ADHD brain with a normal brain.