Simon Rattle leads the famed orchestra in music by Mahler and Ades.

Concert audio for this concert is no longer available. 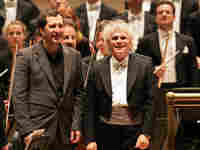 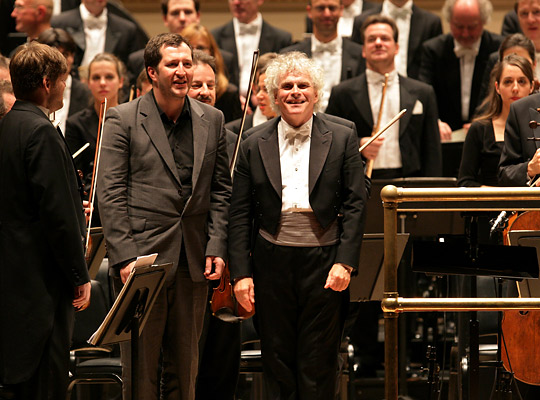 Hear conversations about the Berlin Philharmonic.

Hear a feature on Rattle and the Berlin Philharmnonic

As a part of Carnegie Hall's first major international festival — Berlin in Lights — conductor Simon Rattle and the revered Berlin Philharmonic have taken up a week's residency at the hall with more than a dozen performances. 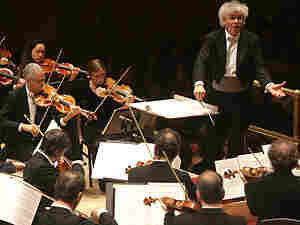 Simon Rattle conducts the Berlin Philharmonic at Carnegie Hall. The orchestra and conductor have strong ties to the music of Gustav Mahler. Chris Lee hide caption 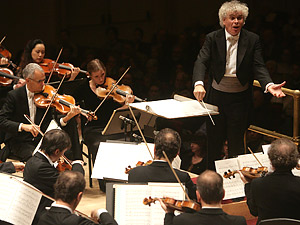 Simon Rattle conducts the Berlin Philharmonic at Carnegie Hall. The orchestra and conductor have strong ties to the music of Gustav Mahler.

On Wednesday, Nov. 14, the Philharmonic performed Das Lied von der Erde in one of three concerts devoted to the final works of Gustav Mahler. The performance features tenor Ben Heppner and bass-baritone Thomas Quasthoff. Rattle opens the concert with the U.S. premiere of Tevot, a new work by British composer Thomas Ades. The live webcast is presented by NPR, WNYC, in New York, and American Public Media.

Mahler's Das Lied von der Erde ("The Song of the Earth") is a meditative, expansive farewell in the form of a symphony with six songs. It's the first of three works in the composer's so-called "farewell triology" his final three works, including the Ninth Symphony and the unfinished Tenth. Mahler wrote these pieces after he was diagnosed with an incurable heart defect in 1907.

With death being an enduring subject in his music, Mahler was naturally superstitious about Das Lied von der Erde while composing it in 1908. He refused to call the new work "Symphony No. 9," as he was convinced that any composer who tried to top Beethoven by writing more than nine symphonies was doomed.

Conductor Bruno Walter, who premiered the work in Munich in November 1911, said, "I was profoundly moved by that uniquely passionate, bitter, yet resigned, and benedictory sound of farewell and departure, that last confession of one upon whom rested the finger of death."

Mahler found the texts for Das Lied's songs in a book called The Chinese Flute, a volume of ancient Chinese poems in German translations. The songs are titled "The Drinking Song of Earth's Misery," "The Lonely Soul in Autumn," "Of Youth," "Of Beauty," "The Drunkard in Spring" and "The Farewell."

Tevot, a new orchestral work by Thomas Ades, was commissioned by the Berlin Philharmonic and premiered by the orchestra this spring, with Rattle conducting.

The piece marks a 10-year collaborative relationship between the composer and Rattle.

In 1997, Rattle helped bring Ades into the spotlight by premiering Asyla, music Ades wrote for Rattle and the City of Birmingham Symphony Orchestra. Rattle also chose Asyla for his inaugural concert after taking over as music director of the Berlin Philharmonic in 2002.

Tevot is scored for an enormous orchestra, the largest orchestral force Ades has used so far. The title is Hebrew for "arks," as in Noah's Ark, but also refers to the bars on a page of sheet music. Ades recently told London's Guardian newspaper how the two meanings intertwine.

"I liked the idea that the bars of the music were carrying the notes as a sort of family through the piece," he said. "And they do, because without bars, you'd have musical chaos. But I was thinking about the ark, the vessel in the piece, as the earth. The earth would be a spaceship, a ship that carries us — and several other species — through the chaos of space in safety. It sounds a bit colossal, but it's the idea of the ship of the world."

Tevot's sound world mixes turbulence with calm spaces in one extended 25-minute movement. Critic Tom Service, who heard the piece take shape in rehearsals in February, was awestruck with what he calls the music's "frightening emotional directness."

"Of any piece of new music I've heard at its premiere," Service wrote, "this is one of the most immediately, richly powerful."

Ades was born in London in 1971 and studied at King's College, Cambridge. The Chamber Symphony he wrote at 19 was called "astonishing" by one British paper.

That led to a successful commission by the London Sinfonietta, and in 1995, his risque chamber opera Powder Her Face brought Ades straight into the spotlight, with comparisons to that previous British wunderkind, Benjamin Britten.

Now, Ades is revered as one of today's major composers, and his work is performed around the world. This year alone, he appeared in Paris, where a festival presented nearly two thirds of his music, and at London's Barbican Hall, which hosted a seven-concert festival. Ades, like Britten before him, is the artistic director of the acclaimed Aldeburgh festival in England.