Accessibility links
Thai Tattoo Tradition Draws Worldwide Devotees For centuries, Thai soldiers have covered their bodies in protective tattoos called Sak Yant. Today, people from around the globe are flocking to master artists to be inked with designs that some believe can protect them from bullets and rid them of vices. 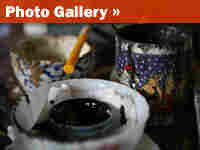 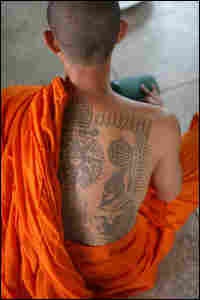 A monk at the Wat Bang Phra temple outside of Bangkok meditates while tattoos are inked onto a long line of devotees. Scott Carney for NPR hide caption 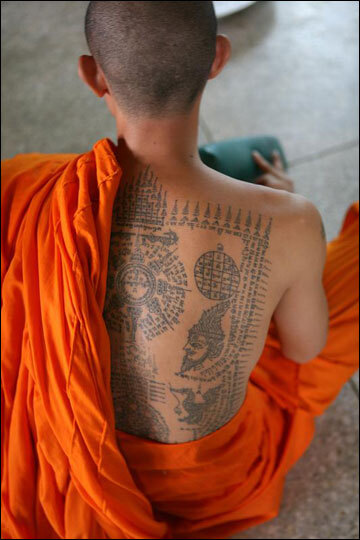 A monk at the Wat Bang Phra temple outside of Bangkok meditates while tattoos are inked onto a long line of devotees. 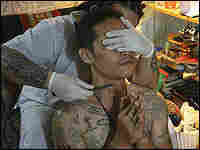 Ajarn Sua runs a knife across the neck of a devotee after completing a tattoo. The ritual is said to protect the subject from harm by empowering the tattoo. Scott Carney for NPR hide caption 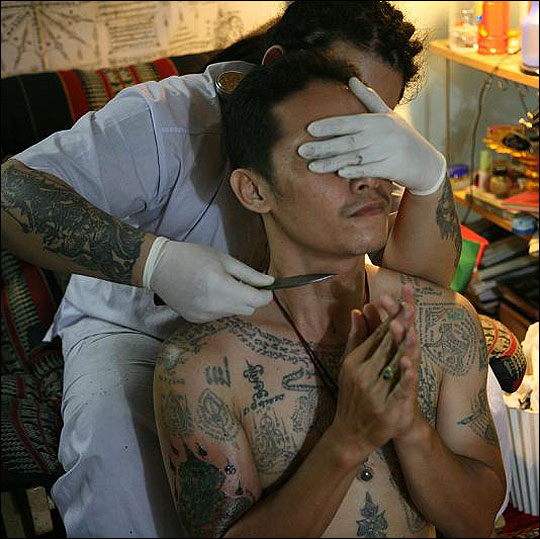 Ajarn Sua runs a knife across the neck of a devotee after completing a tattoo. The ritual is said to protect the subject from harm by empowering the tattoo.

A note for fans of 'Lost' who are wondering about Jack Shephard 's mysterious "Thai" tattoos:

Or, watch a video of Fox discussing them.

Can a tattoo stop a bullet? Some people think so.

For centuries, Thai soldiers have covered their bodies in protective tattoos called Sak Yant. Today, the ancient ritual is booming and thousands of people — in Thailand and beyond — are flocking to master artists to have the powerful designs inked on their bodies.

The Wat Bang Phra Buddhist temple, about 30 miles west of Bangkok, is one of the most highly esteemed locations for Sak Yant. Dozens of monks and master artists, who have spend years perfecting the art, can be found there.

One afternoon, a group of men — many already covered head to toe with tattoos — discuss, in the courtyard, how best to use the canvas of their skin. The dirty, dilapidated campus covered with cobwebs may not immediately invoke an aura of prestige, but these Sak Yant devotees are less interested in the buildings than the designs that will soon cover their bodies. Many have traveled from far reaches of Thailand. A tattoo from this temple, they say, can protect them from danger or even death.

Chakkrapad Romkaew, one of the devotees, says that his first tattoo altered his outlook on the world, made him braver and encouraged him to become a soldier. His back is covered in elaborate geometric patterns and Buddhist prayers. In a week, he's being sent to the south of Thailand as part of an anti-terrorist squad. He wants to get another tattoo so, he says, he will be more fully protected before the bullets begin to fly.

"There are so many dangers waiting down there," he says. "Before I got a tattoo, I never wanted to be a soldier. But when they got into my skin, my desire to be a soldier got stronger."

Jabbed by a Needle a Thousand Times

Master artist Ajarn Sua prepares to place a tattoo on the young soldier by sharpening a two-foot-long needle. Often, the tattoo is simply a series of dots created when the needle passes through the skin. After the pattern has been drawn, the monks rub ink into the wound and say a prayer to empower the charm hidden inside the tattoo.

There are hundreds of traditional designs, many of which revolve around animal figures. One of the most powerful, according to the tradition, is a tiger that spans the whole of a person's lower back. An unprepared person can suddenly find that their whole life is turned around after being inked, a monk named Suntotn Prapagaroe explains.

"If a person has a tiger spirit, he will act like a tiger. He cannot control himself, the spirit controls him," Prapagaroe says. "He will spread his hand like this and roar."

Although the tattoos may ultimately protect believers from suffering, pain is an inherent part of the process.

"It's like being jabbed by a needle a thousand times," says Paul Davies, a British Internet entrepreneur who also has come to the Wat Bang Phra temple for a tattoo.

Not all Sak Yant masters rely on the traditional needle methods. The master Ajarn Sua, who has a studio just north of Bangkok, says that a number of people coming to him for tattoos urged him to adopt the electric tattoo needle.

Modernization does not necessarily mean canceling out tradition, however. After inking one man's back, Sua places his hand over the man's face and forces his head backwards. He draws a ritual knife across his neck and then stabs him lightly in the back.

"No person with this tattoo will ever be hurt by bullets or knives," he says.

The Parlor to the Stars

Although Sak Yant has existed for thousands of years, it began to expand in new directions several years ago due to one extremely famous devotee: Angelina Jolie. In 2004, the actress flew to Bangkok to meet with venerated tattoo master Ajarn Noo Kanphai, who placed a large tiger on her lower back — and a string of Thai script on her left shoulder.

Ajarn Noo's studio — known as the parlor to the stars — contrasts sharply with the Wat Bang Phra temple. Simple worn walls are replaced with photos of high rolling Thai celebrities and American CEOs. One recent afternoon, two well-known Thai comedians and an actor from the Cannes film hit Om Bhat waited for designs.

Tattoos, Kanphai says, can give people the courage to face the difficulties of their lives. They can multiply wealth and protect the wearer from harm. "Many people have come to me with drug problems, but after I give them a tattoo, the problems go away," he says. A tattoo can really change your life."