Accessibility links
War Comes Home for Mother-Soldiers For two Southern California mothers who served in Iraq, returning home was a difficult transition. One National Guard sergeant said she had to "unplug the warrior" in her. The other found herself distant, mentally, from her children. 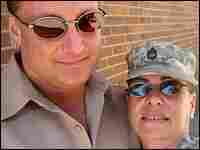 Philip Smith and Sgt. Kimber Smith, upon her return from Iraq in May 2007. Courtesy Kimber Smith hide caption 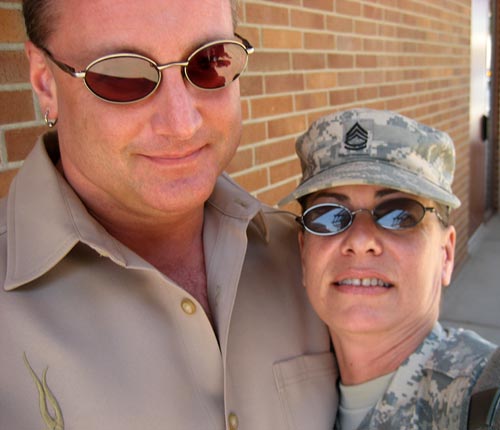 Philip Smith and Sgt. Kimber Smith, upon her return from Iraq in May 2007. 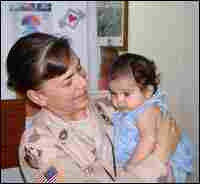 Sgt. Kimber Smith holds an infant brought into her office in Iraq last year. "For a brief moment, I felt normal," she says. hide caption

Note: This image was digitally altered to protect the identity of an Iraqi citizen in the background. 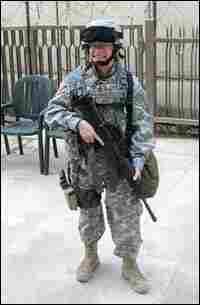 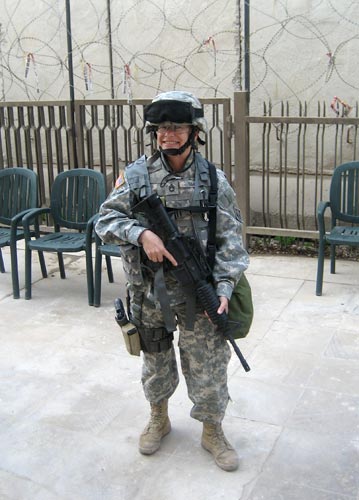 "That's me in all the battle rattle — two weapons and a gas mask," Sgt. Kimber Smith says.

Since 2002, women have served nearly 170,000 tours of duty in Iraq and Afghanistan and make up about 10 percent of U.S. forces in those two conflicts. All Things Considered is examines the expanding role of women in the military. 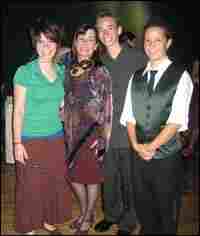 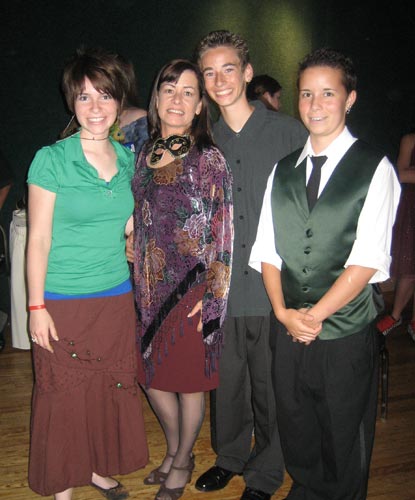 Kimber Smith (center) with her children (from left) Katrina, Douglas and Sydnee. 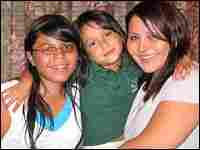 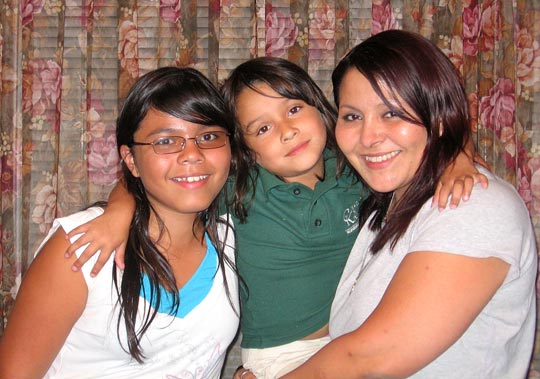 Sgt. Marisa Gonzales and friends in her unit in Iraq, Sgt. John Kirtley (left) and Sgt. 1st Class Simon Trinidad, at the end of their tour in 2005. Courtesy Marisa Gonzales hide caption 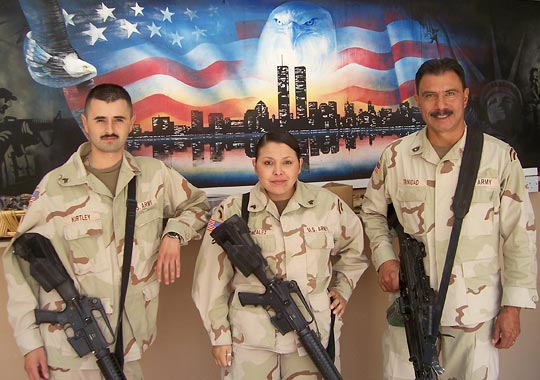 Sgt. Marisa Gonzales and friends in her unit in Iraq, Sgt. John Kirtley (left) and Sgt. 1st Class Simon Trinidad, at the end of their tour in 2005. 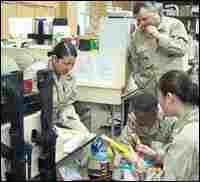 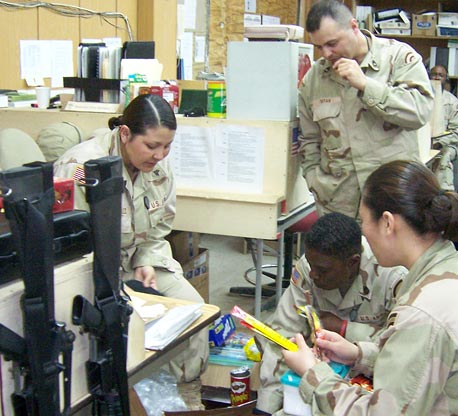 Sgt. Marisa Gonzales (left) and other members of her unit in Iraq open a care package from a family in Southern California.

Kimber Smith is a soldier, wife and mother. After a year deployed in Baghdad with the California Army National Guard, it has taken months for her to adjust to her life back in the suburbs.

Among the photos she has from her deployment, one shows where a mortar smashed into her compound in Baghdad.

"You know they're close when they land and you can feel your hair move because of the air displacement from the impact," Smith says.

Smith had a desk job supporting Army reconstruction projects, such as schools and water-treatment plants. She came to view her unit and her Iraqi colleagues as family.

One picture shows her holding an Iraqi infant that was brought in for a visit.

"That was the first child I was able to hold in probably 10 months," she says. "And every female in that office just ... swooped around this child ... And for a brief moment I felt normal."

Smith says she did not feel normal when she returned to her husband and children in May. The two youngest were 15 and 13 when she left. Smith was gone for 15 months, including her time at Fort Bliss.

"That is a dreadfully long time," she says.

As soon as she pulled into the driveway, her children were "crawling in the vehicle. I couldn't even get out," she says.

"Everything was very overwhelming. Part of me was overjoyed ... The mom inside of me was just like, 'Yeah!' The other part of me panicked. It's like, 'Why are these people running at me?'"

"You know, it took me a while to unplug the warrior. I'm still in that high-adrenaline mode and now I have to be Mom?"

While she was away, Smith missed her youngest son's puberty.

"My youngest son, when I left, was maybe here to my nose in height," Smith says. "And I came back, he's four inches taller than me and his voice is deep. And I was like, 'Who are you?' ... That devastated me. So that's one thing I feel I lost. I lost my baby."

Smith has been home for five months. It's too early to know whether a year in Baghdad made her a different kind of mother. Her friends tell her she's a little bit colder now.

And her kids say she's a little less patient.

"Yeah, maybe I am less tolerant of things I consider to be petty," she says.

One of the kids might say, "Mom, she called me this."

Smith says she replies: "OK, are you bleeding? Get over it."

"I guess that's where I'm fortunate, though," she says. "I didn't deploy when my kids were very little and very needy of mommy."

The Impact on Young Children

Sgt. Marisa Gonzales, another soldier from Southern California, did deploy when her children were very young. She returned from Iraq two years ago. When she's not in uniform on duty with her National Guard unit, she teaches third grade.

Gonzales' two children went for a year without their mother, who was serving at a forward operating base in Tikrit, Iraq. During her deployment, her ex-husband moved back into the house in East Los Angeles to take care of the girls.

The oldest, Melanie, was 9 years old when her mother left.

"When she actually told me she was going to go, I actually thought she was kidding around with me," Melanie says. "And then I started wondering what's going to happen to us? For the first day or so I thought, 'Are we going to go with her?'"

'Maybe I Can Talk to Your Boss'

Miranda was 3 years old when her mother was deployed. Gonzales says she remembers her younger daughter blaming herself for her deployment.

"I remember speaking to her once on the phone and her saying, 'Whatever I did, I'm sorry. Just come home,'" Gonzales says. She reassured Miranda that she had done nothing wrong.

Then Gonzales remembers Miranda told her: "Maybe I can talk to your boss and he can just bring you back."

Gonzales says, "It was difficult to explain it to her being so far away."

When Gonzales returned, Miranda treated her mother almost like a stranger. Then, the girl wouldn't let her mother out of her sight.

"She wouldn't want me to walk out the door without her," Gonzales says of her younger daughter.

Miranda followed her everywhere — even standing outside the door when her mother went to the restroom.

When Gonzales goes away for her weekend training with the National Guard, Miranda asks her mother whether she's leaving for a long time.

Even though Gonzales is back, it doesn't mean she is always there. The sense of being under a constant threat — the sirens, the mortar attacks, the tension and fear of war — didn't lift because she came home.

Melanie remembers her mother being distant, asking to be alone in her room.

"Sometime when I'd want to talk to her, it'd be like she was listening but yet at the same time she was just going, 'Yeah.' So after a while, I just kind of stopped talking to her.

"But now she'll ask me, 'How was your day at school?' ... And she wants to be more into my life now. Like she says, she's still working on becoming a mom again."

Both Gonzales and Smith say their year in a war zone was the hardest thing they've ever done — and one of the most important.

They have decided to stay on in the California National Guard, even though they have the option to retire. That means that both of them could — once again — be called to war.