Just My Imagination (Running Away With Me) 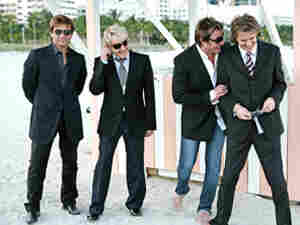 You're not dreaming — it's not 1984. But this week's new music includes albums from a couple of comeback kids: Duran Duran and Boyz II Men. Lizzy Goodman, editor-at-large of Blender magazine, samples the new old sounds.

The new Duran Duran record, Red Carpet Massacre, sounds like the band has more in common with Justin Timberlake than we thought. Producer to the stars Timbaland and his protégé Danja are both all over this album, and Timberlake himself has a couple of production credits, as well. It's convenient for Duran Duran to be as influential as it's been, because even on its comeback record, it sounds current.

Boyz II Men has come back with an album full of songs that may not have needed remaking. Motown: A Journey Through Hitsville USA is pristine. There's a reason that Boyz II Men is one of the most successful male R&B vocal groups ever. It does what it does very well. It's pretty much exactly what you'd expect from Boyz II Men covering a bunch of Motown hits. The only thing mildly surprising here is the cover of "The End of the Road." Boys II Men covers its own song, which is sort of brave.

It's tricky to decide whether the new Aretha Franklin album, Jewels in the Crown: Duets with the Queen of Soul, is a great record or a marketing gimmick. Maybe it's both. The Fantasia pairing is great: For some reason, the two of them together works. And there's something appealing about mining the catalog of a great artist like Franklin. It's interesting to see what she can do with other singers. A lot of her disciples are on this record — people who are very prominent in their own right, like Mariah Carey and Whitney Houston. But Aretha Franklin is the queen, and Jewels proves it again.

Alicia Keys has sold 19 million records and won nine Grammys. Lizzy Goodman says that Keys is doing exactly what she's been doing all along on As I Am, but "I don't think it's quite as good as some of what we've heard from her in the past." Keys has talked about wanting to break out of the box and explore a little bit with this record. Her collaborations with John Mayer and Linda Perry probably represent her attempts to do that, but those aren't the songs that stand out. The most successful songs are the ones on which she does what we know she can do, which is channel great, old-school '70s soul. "No One" is already getting lots of airplay, and will probably be a massive radio hit.

Album
As I Am
Artist
Alicia Keys
Label
J
Released
2007