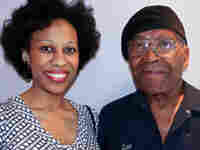 In this week's StoryCorps Griot Initiative, World War II veteran Leon May he tells his daughter, Angela, about leaving for basic training at Camp Lejeune in North Carolina.

In 1943, May was drafted into the Marines, which was integrated a year earlier.

After World War II, May worked for General Motors for almost 50 years. He is now a visual artist, working in oils, pencils, sculpture and clay.

May and his daughter were recorded at a StoryCorps booth in Detroit, Mich. StoryCorps Griot is currently in Memphis, Tenn. Next stop is Harlem, New York.

All the Griot Initiative recordings are archived at the Library of Congress. A copy of each interview will also go to the National Museum of African American History and Culture in Washington, D.C.

This segment was produced by Selly Thiam. Senior Producer for StoryCorps is Michael Garofalo.