Accessibility links
Finding Holiday Recipes in Cyberspace Tanya Wenman Steel, editor-in-chief of the food Web Site Epicurious.com, is full from Thanksgiving even before the turkey goes in the oven. Kitchen Window host Bonny Wolf talks with Steel about the site and gets tips for Thanksgiving cooking. 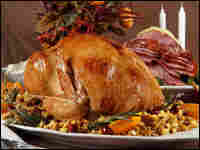 Get a recipe for Thanksgiving mashed potatoes, submitted by Epicurious users Franco and Francesca Tronchin.

Tanya Wenman Steel is full from Thanksgiving even before the turkey goes in the oven.

By then, as editor-in-chief of food Web site Epicurious.com, she has overseen the production of Thanksgiving guides, menus, tips and timelines. Throughout the month, 4 million to 5 million unique visitors visit the site in search of ideas, answers and maybe a few new recipes to add to the family standards.

Steel talks with Bonny Wolf, host of NPR's Kitchen Window podcast, about what Epicurious users are looking for this year.

Turkey, as usual, is the main topic. People want to know what kind of bird to buy (organic, fresh, frozen) and how to prepare it.

Brining – soaking the turkey in a saltwater bath – is a much-discussed subject, she says. Steel is a briner while Rick Rodgers, author of Thanksgiving 101 (Broadway 1988) and a consultant to Epicurious this season, is anti-brining. Both feel strongly about their positions.

Rodgers put together a Thanksgiving guide for beginners to the site, one of the two special pieces the Conde Nast Web site offers this year. The other is a "Thanksgiving Adventure" for more advanced cooks and includes international flavors, something Steel says site users are showing a lot of interest in. The turkey on that menu, for example, is marinated in a Mexican mole sauce.

Steel also talks about tips for leftovers beyond the turkey sandwich and has suggestions for vegetarians who want something other than a tofu turkey.

And for dessert? She says most visitors to the site are still looking for pumpkin pie.

Mashed Potatoes with an Italian Accent 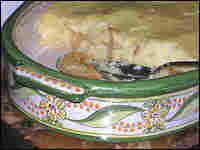 Even in the off-season, Francesca Tronchin, who teaches archaeology and art history at Ohio State University, goes to Epicurious.com at least three times a week looking for recipes.

Until recently, however, she had never made a comment on the site's blog. Then, in response to a call for Thanksgiving stories, she posted a comment about her father's mashed potatoes.

"My father has a restaurant [Pasta, Pasta, Pasta in Denver, Colo.] and has takeout orders for his mashed potatoes every Thanksgiving. When I call him Thanksgiving day, he's exhausted from preparing more than 200 portions of those potatoes.

"It strikes me as so bizarre that an Italian from the Veneto has become known in his adopted American city for his mashed potatoes."

Tronchin says as variations, a blue cheese (such as gorgonzola) or roasted, mashed garlic, could be included when the sour cream is added. Her father also suggests using a ricer, which gives the potatoes a much fluffier texture than if they are mashed.

Slice onions into ¼- to ½-inch rings

Melt 2 tablespoons of butter in a large saute pan over low heat. Saute the onions until very soft and browned, stirring from time to time, 30 to 40 minutes. Set aside.

In a large, ovenproof dish, spread one half of the prepared potatoes. Spread the cooked onions over the potatoes, then add the remaining potatoes on top.

Cook about 30 minutes, or until the top of the potatoes are crispy and slightly browned.

The dish can be prepared the day before — up through putting the dish together and before cooking. Refrigerate. Allow the potatoes to come to room temperature before putting them in the oven the next day.