Accessibility links
In Drought-Stricken Georgia, a Prayer for Rain Georgia Gov. Sonny Perdue hosts an outdoor prayer service at the Capitol to address the dire need for rain. The vigil follows his declaration of a state of emergency. Earlier efforts were conservation and negotiation.

Listen
In Drought-Stricken Georgia, a Prayer for Rain 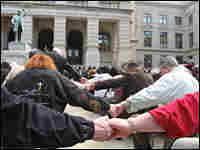 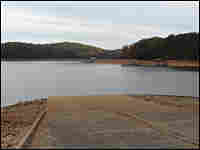 Water levels are alarmingly low at Lake Lanier, north of Atlanta. It is the largest water basin in the area and provides drinking water to many of Atlanta's residents. Kathy Lohr, NPR hide caption

Lakes and rivers have fallen to record low levels in Georgia, Alabama and Florida, states hit hard by a severe drought in the South. Most farmers have been forced to rely on irrigation, if they have it. And water restrictions put in place months ago don't seem to be enough to conserve resources.

At the state capitol in Georgia Tuesday, the governor tried something different. On a partly cloudy warm fall day, hundreds of people from the region came to join Gov. Sonny Perdue in a prayer service for rain.

"I'm here today to appeal to you and to all Georgians and all people who believe in the power of prayer to ask God to shower our state, our region, our nation with the blessings of water," Perdue said.

Perdue, a Baptist, said people here have not done all they can to conserve and manage the state's resources. Three Protestant ministers also spoke to the crowd of young and old, black and white.

"There's no doubt in our minds," Clark said. "We came prepared with our umbrellas because we fully expected the heavens to open."

Harris said he is glad the governor brought people together at the service.

"I appreciate what our governor said ... Lord, we have not done our best, and we're trying to correct that now. But we need divine intervention," he said.

The governor has been focused on the drought for weeks. Last month, Perdue declared a state of emergency in much of Georgia and called for conservation. He met with the governors of Alabama and Florida in Washington two weeks ago. He also sued the Corps of Engineers to reduce the amount of water flowing into those states.

About an hour and a half north of Atlanta, at Six Mile Creek, the level of Lake Lanier appears alarmingly low, at more than 16 feet below what's considered full. Huge chunks of red clay are exposed. Trees jut out from the water, and boat ramps now stop several feet above the water level.

Wilton Rooks of the Lake Lanier Association is concerned about the $5 billion economy that's connected to the lake. He says some businesses have already closed.

"The corps is predicting, or projecting, anyway, that the lake will be at 1,049 feet by the first week in December," Rooks said. "That will set a new all-time record low for the lake."

That's a level not seen here since the reservoir and lake were built and filled back in the 1950s. Others are concerned about agriculture and drinking water. One small Tennessee town is getting water shipped in. Many people who rely on wells are concerned they are running low, too.

State Climatologist for Georgia David Stooksbury says the problem is that much of the state and parts of the Southeast haven't had normal rainfall for 18 months. Some areas are as much as 40 inches below normal.

"We're seeing reservoirs all over the Southeast start to reach critical levels," Stooksbury said. The effects, he said, are being seen across Georgia, Tennessee, Alabama and the Carolinas.

"The longer a drought continues, the more impacts we are going to see," Stooksbury said. "So this does not bode well for folks in the Southeast."

Many experts say it's going to take more than prayers to turn things around. They suggest it's time for the Southeast to do a better job of planning, conserving and managing the water it has.

GeorgiaDrought.org
U.S. Drought Monitor (from the University of Nebraska-Lincoln)