Accessibility links
Propaganda at Play in Iraq News Releases The U.S. military in Iraq is engaged in a propaganda struggle with insurgents and sectarian militants that is as intense as the war with bullets and bombs. 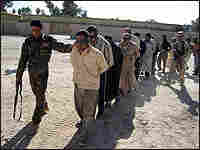 The U.S. military in Iraq is engaged in a propaganda struggle with insurgents and sectarian militants that is as intense as the war with bullets and bombs.

The weapon is language, and the goal for each side is to portray the opposing side as evil. There are questions, though, about whom that language is supposed to influence: the American public, the Iraqi public or the insurgents themselves? There's also the issue of whether loaded language obscures the distinction between combatants and bystanders.

In his futuristic novel Nineteen Eighty-Four, British author George Orwell introduced a kind of totalitarian language called "Newspeak," designed to keep the population from thinking subversive thoughts. Orwell understood that what we call something determines how we think about it.

This headline was taken from a news release issued by a U.S. military press desk in Baghdad last month. Virtually every word carries an extra freight of meaning that can influence the way the news media and the public think about the conduct of the Iraq war.

"Terrorist," for instance, is most often applied in these releases to people killed by U.S. patrols. The word implies that the slain person is not just a military adversary, but a fanatic who is willing to kill anonymously and indiscriminately to trigger fear among the population.

Terrorism is common in Iraq; bombers have slaughtered thousands of Iraqi civilians, but the U.S. military is using the term "terrorist" to describe someone who fires a gun at American soldiers. Such fighters might more properly be called "guerrillas," "insurgents" or "militants."

Some people described as slain "terrorists" in military news releases have later been found to be women and children who were in a house that was hit by an air strike. A military phrase coined during the Vietnam War describes such deaths with the deliberately vague name "collateral damage."

Just last month, U.S. officials said they regretted the deaths of 15 women and children who were killed in a U.S. air attack, which also killed 19 men described as terrorists. A military spokesman, Major Brad Leighton, blamed the slain men, saying, "These terrorists chose to deliberately place innocent Iraqi women and children in danger by their actions and presence."

Specialist Charles Espie, who works at the military press desk in Baghdad, says terrorists are "people we are classifying as committing terrorist acts. Terrorist activities would be like planting IEDs (improvised explosive devices)."

Andras Szanto, the editor of a book of essays called What Orwell Didn't Know, says this kind of language is "classic Orwellian," referring to George Orwell's Nineteen Eighty-Four, and to the propaganda described in Orwell's 1946 essay, "Politics and the English Language."

Reporters need to be wary of military language, says Farnaz Fassihi, senior Middle East correspondent for the Wall Street Journal and a contributor to Szanto's book of essays.

"A lot of the military jargon has become part of the everyday lingo in journalism," she says, "and there's a danger to that. When the White House started calling it a 'surge' instead of a troop increase, that became what the journalists called it."

"The military knows what our journalistic conventions are," says David Corn, the Washington bureau chief for Mother Jones magazine. "They know we first have to give the story as the government says it is."

Corn, the co-author of Hubris: The Inside Story of Spin, Scandal, and the Selling of the Iraq War, says the system gives the military a particular advantage in Iraq, where security problems make it difficult for reporters to find and interview anyone who might dispute whether someone who was killed was a terrorist, a fighter or a bystander.

Some of the military's assertions are hard to challenge simply because they're vague. A press release labeling the enemy as part of the "Al-Qaida in Iraq network" resonates with Americans' outrage over the attacks of Sept. 11, 2001, even though the Iraq-based group didn't link with al-Qaida until two years after the attacks.

Military officials acknowledge — in private — that it's hard to know what the affiliation of an insurgent may be. If it's a Sunni Muslim fighter, he might be aligned with one of many groups under the umbrella of the Islamic State of Iraq, the same network as Al-Qaida in Iraq. Then again, the insurgent might be part of another coalition, the Reformation and Jihad Front, which has opposed al-Qaida.

Military press officials say the language in the releases reflects the fact that they are aimed at a varied audience.

Espie, the Army press spokesman, says releases go to Arab as well as Western media, which is why they often end with a statement "re-informing the mission — that is, reminding the people reading it why we're here and what we're doing."

An example from Oct. 26 reads: "We continue to clear and hold areas where terrorists think they can hide," said Maj. Winfield Danielson, MNF-I spokesman. "Nowhere in Iraq is al-Qaida safe from the Iraqi and Coalition forces who seek to bring them to justice."

For their part, militant groups keep up a constant barrage of propaganda, both against the U.S. occupation and the Iraqi government.

A favorite method is to post video and audio statements on Web sites known for Islamist militancy. Favorite epithets for Americans include "invaders" and "crusaders," in an effort to cast the United States as a Christian enemy bent on defeating Islam.

The Shiite-led Iraqi government is often referred to as "apostate" and "infidel," in an effort to portray its leaders as lapsed Muslims who are betraying their faith.

In Orwell's "Politics and the English Language," he claimed that every propagandistic use of language "anesthetizes a portion of one's brain." He called it the "invasion of one's mind by ready-made phrases," and warned that it was "designed to make lies sound truthful and murder respectable, and to give an appearance of solidity to pure wind."