Accessibility links
'Love in the Time of Cholera' Director Mike Newell turns a literary classic — about a lad who moons over his lady love for 51 lovesick years — into something cinematically lush and visually handsome. But the tone is off: Gabriel Garcia Marquez's famous love story ends up feeling more overripe than overheated.

'Love in the Time of Cholera'

'Love in the Time of Cholera' 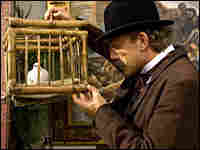 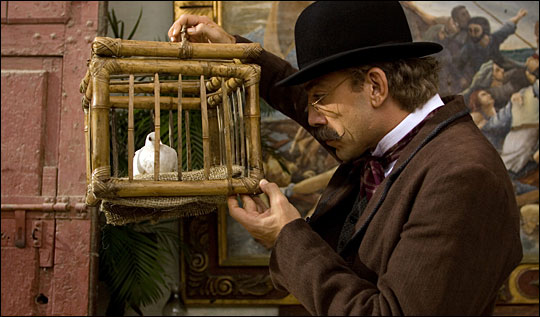 Ill served: Javier Bardem plays the moony Florentino in Love in the Time of Cholera.

Tinseltown's time-honored way of filming Latin American best sellers is to hire foreign-language directors and English-speaking actors and have them play in English — think Jeremy Irons, Meryl Streep and Glenn Close in House of the Spirits, or Keanu Reeves and Anthony Quinn in A Walk in the Clouds.

For the big-screen take on Gabriel Garcia Marquez' best-selling Love in the Time of Cholera, they instead hired an Oscar-winning English director — Four Weddings and a Funeral's Mike Newell — and a international cast including Marcela Mar (from Colombia), Javier Bardem (Spain) and Giovanna Mezzogiorno (Italy). Then they still asked them to play in English, which adds a degree of difficulty to the already difficult job of translating the novel to the screen.

Especially this novel, which is tricky in tone, and feverishly complicated. Newell is not, perhaps, the most logical go-to guy for stories about obsessive passion (light comedy and straight-ahead drama being more his thing). He's turned this literary tale — of a lad who moons over his lady love for 51 lovesick years — into something cinematically lush and visually handsome, but in his hands, Marquez's famous love story ends up feeling more overripe than overheated.