Accessibility links
Max Roach Memorial Show On May 24, 1987, Max Roach performed solo and with two groups in the performance studio of WBGO. Wearing a silk suit with rolled-up sleeves, he wowed the listening audience with his precise and melodic drumming. Hear the late, great drummer perform on JazzSet. 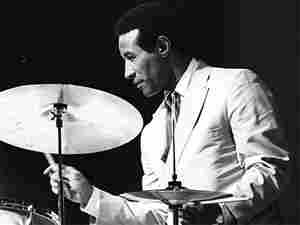 For two extraordinary hours on May 24, 1987, Max Roach (1924-2007) made music live on the air from the Jazz 88 Performance Studio at WBGO in Newark, N.J. The drum master was wearing a grey silk suit with jacket sleeves rolled up while he played. After a solo, MC James Browne introduced Odean Pope and Tyrone Brown on tenor and bass, as well as trumpeter Cecil Bridgewater.

Ambition and determination were qualities of Roach's character. In his 20s, he moved the drums from support role to parity with the horns in the glorious but short-lived Clifford Brown/Max Roach Quintet. He dug into the Civil Rights struggle with his We Insist: The Freedom Now Suite. He founded the all-percussion ensemble M'Boom. He joined the University of Massachusetts-Amherst faculty, and he worked with dancers, filmmakers and early hip-hop artists. He traveled to the 1998 Havana Jazz Festival, where Cuban musicians honored him.

In the 1987 Max Roach Double Quartet, Roach sounds precise and melodic on his drums. He chats with the audience and with Browne, who now admits to having been nervous. Having Roach come by on a Sunday afternoon was no casual occasion, but it turned out well. Hear it on JazzSet.