Accessibility links
An Acoustic 'Moneymaker' from Rilo Kiley In this live performance at KUT, the band performs a few songs and discusses its ascent from independent cult success to full-on pop stardom. Hear acoustic versions of songs from Rilo Kiley's new album, Under the Blacklight.

An Acoustic 'Moneymaker' from Rilo Kiley

An Acoustic 'Moneymaker' from Rilo Kiley 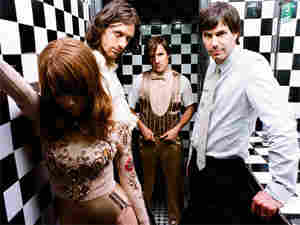 We were pleased to see Rilo Kiley come to our studios for a session, especially since its schedule was only open on a Sunday morning. The entire session was relaxed and enjoyable, and it reminded me why I enjoy having so many different kinds of bands come by our studios — especially considering how long the days can be for young touring acts. Though Rilo Kiley has been together for almost 10 years, it's still trying new things and uniting after worthwhile solo endeavors to move forward as a group. They even giggled and shared stories over coffee, exhaustion be damned.

Graceful and soft-spoken, Jenny Lewis related Rilo Kiley's organic songwriting process, giving credit to the producers who worked on the new Under the Blacklight for helping the band find a cohesive sound. "It's been quite a few years since we recorded More Adventurous," Lewis says. "We've all grown up a bit, and our tastes have changed, so it didn't seem like a marked change to us." The band talked about how the recording process worked after a year apart, noting that Rilo Kiley began with about 20 songs before settling on a smaller number that seemed to work.

The first time I heard "Dreamworld," it was so shimmering and radio-friendly (in a good way!) that it really caught my attention. I've latched on to that song, maybe because I read elsewhere that it had something to do with the band's status as "the new Fleetwood Mac." It makes a certain amount of sense, as male-female harmonies intertwine around intricate, fingerpicked guitar. The song's title is, when taken in the Fleetwood Mac context, almost a perfect finishing touch. As for the band, guitarist and songwriter Blake Sennett says, "Well, it's better than [being] the old Fleetwood Mac!"

Led by former child actors Jenny Lewis (vocals, guitar, keyboards) and Blake Sennett (guitar, vocals), the L.A.-based band steadily gained underground notoriety with its catchy indie-pop in the late '90s and early 2000s. Group members have not only found success in Rilo Kiley, but also side projects such as The Postal Service, The Elected and Lewis' solo record with The Watson Twins, Rabbit Fur Coat. Under the Blacklight, the band's first album on a major label (and fourth overall), is its latest.