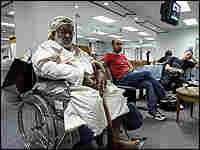 Medicine is changing around the world. People are traveling far from their homelands to get health care. Americans are going across the border and overseas to find health care at a better price.

The emerging middle-classes of India and China are traveling to the Middle East for higher quality care. Fewer people are coming to the United States for their medical needs, partly because big-name American hospitals and medical schools are establishing foreign outposts to meet a growing demand as incomes and expectations rise.

And it's not just American institutions seeking to expand their brands into new markets. Newly minted hospital chains in India, Thailand, South Africa and elsewhere are also expanding regionally, to capture a growing demand for higher quality health care.

In a series of stories during November, NPR's All Things Considered examines this new globalization of health care.

In the first installment, Bob Kocher of McKinsey & Co. outlines the four segments of medical travel. The smallest segment, he says, is western patients from the United States, Canada and Europe traveling to other countries to get care at lower costs — or to circumvent waiting lists in their home countries. A larger segment is people in developing countries like Thailand traveling to other countries in the region to get care that's not available at home.

The more familiar form of medical travel is the traditional medical tourism; people going for cosmetic surgery at a comfortable spa, often seeking privacy far away from home. The fourth segment is people seeking alternative treatments, such as Chinese medicine in China or Ayurvedic care in India.

NPR's Richard Knox then looks at one American institution, Harvard University, and the relationship it's established with a for-profit hospital chain in India, Wockhardt. He travels to Bangalore and reports that the hospital is relying heavily on Harvard for quality improvement. Wockhardt wants to bring local medical care up to the best U.S. standards.

In reports later this month, we look at establishing medical tourism as a new line of business in the United States, NPR's Emily Harris travels to a spa in southern Germany to look at care there. NPR's Jon Hamilton examines medical tourism in Thailand and the negative impact it's having on Thai patients seeking quality medical care.

To close out the series, Knox looks at "reverse brain drain," a new phenomenon caused by the shifts in global health care. Successful Indian doctors, trained in the United States, are giving up their American practices and going back home.