Accessibility links
Black Gold Finances the Dreams for Abu Dhabi The sheiks of the United Arab Emirates have grand plans to pour their vast oil wealth into making one of their premier cities, Abu Dhabi, a technological and cultural mecca. 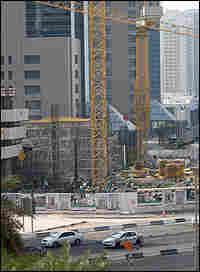 The Future of Abu Dhabi 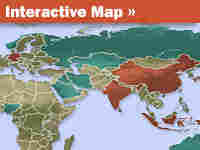 Click to view an interactive map of the countries winning and losing as oil prices rise. 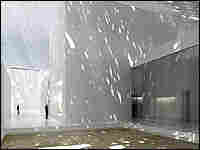 A branch of France's Louvre Museum will be in Abu Dhabi's futuristic arts center. It will consist of a huge, white dome riddled with skylights, inspiring a "daylight shower" feeling. Abu Dhabi Tourism Development and Investment Company hide caption 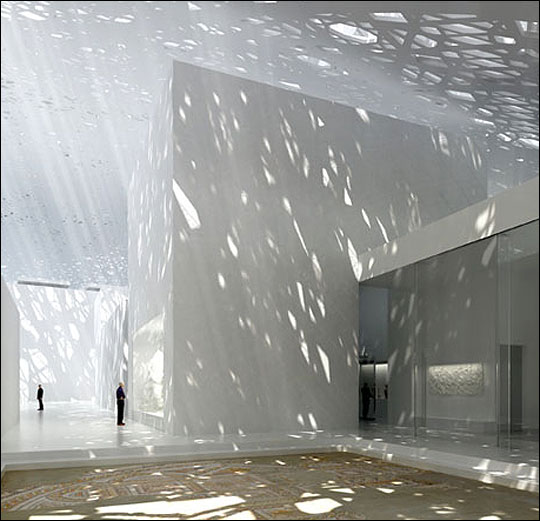 A branch of France's Louvre Museum will be in Abu Dhabi's futuristic arts center. It will consist of a huge, white dome riddled with skylights, inspiring a "daylight shower" feeling. 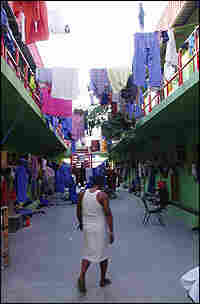 Blue uniforms hang to dry at one of the labor camps in Dubai, a city in the United Arab Emirates. Because of their inability to form labor unions, foreign workers who make up 95 percent of the country's labor pool are vulnerable to exploitation, according to Human Rights Watch. Mohamed Fadel Fahmy, for NPR hide caption

One of the countries winning big from record-high oil prices is the United Arab Emirates.

This federation of seven small sheikdoms in the Persian Gulf only became an independent state in 1971.

Thanks to its oil wealth, it has transformed itself from an undeveloped backwater into one of the world's fastest-growing economies.

With the latest flood of petrodollars, the United Arab Emirates' rulers have set even more ambitious goals.

From Dusty Town to Gilded City

It's opera night at the Emirates Palace Hotel.

In a gilded theater, Arab men in white robes and keffiyas take their seats alongside Western couples for a performance of Georges Bizet's masterpiece, Carmen.

This palace is a massive structure overlooking the Persian Gulf. Its cavernous halls, golden ceilings and marble pillars reportedly cost as much as $3 billion to construct.

The opulence in the hotel is a far cry from what the sheikdom of Abu Dhabi looked like just a few decades ago.

In an exhibit in another wing of the palace, tour guides show groups of schoolchildren photos of the old Abu Dhabi from almost 40 years ago.

In those days, the city was little more than a dusty settlement on the edge of the desert, with huts made from palm fronds and no paved road or bridges.

Emirati industrialist Hussain Al Nowais remembers what life was like before oil transformed his country.

"When I was 10 years old, which was 40 years ago, to come up to have a clean glass of water was difficult," Nowais says.

Today, the United Arab Emirates exports more than 2 million barrels of crude oil a day — and sits on top of vast deposits of both oil and natural gas.

"God have blessed us with resources oil and gas," Nowais says. "We have exploited that resources to the best possible way."

In the 1980s and 90s, the rulers of the nearby Emirati city of Dubai began investing their share of the country's oil revenues into building a world-class airport, seaport, airline and tourist industry.

Dubai is now the busiest transport hub in the region. Some 30 million passengers transit through its airport every year.

Thursday marked the final day of a biannual air show in Dubai, where crowds gathered to watch F-18 warplanes fly ear-splitting loops over the tarmac.

At the show, United Arab Emirates companies like Emirates Airline and Dubai Aerospace Enterprise announced the purchase of hundreds of new commercial jets, amounting to more than $30 billion in sales.

Jean Francois Seznec, a professor who specializes in the political economy of the Persian Gulf at Georgetown University, studies the country's development.

The City of the Future

Seznec witnessed the effects of the first oil boom in this region, when oil prices spiked in the 1970s.

The Abu Dhabi government has launched a plan to partner with M.I.T. to build a research institute aimed at developing alternative forms of energy.

Dr. Sultan Ahmed Al Jaber, the project's director, says land has been allotted for the construction of solar power plants, as well as a "green city" for 30,000 residents, which will try to operate without any carbon emissions.

"Would you choose that we invest in anything else but providing new, clean solutions for power production and for energy sources?" Jaber says. "Wouldn't this be the best, wise advice you would give to a rich nation that is getting most of its revenues from oil and gas?"

Sheikha Lubna Al Kassimi is the economy minister for the United Arab Emirates. She says her government learned a lesson the last time oil prices crashed in the 1990s. It's now trying to diversify the economy and make it less dependent on oil exports.

"The oil crisis taught us a very good lesson," Kassimi says. "You have wealth in your hand and you can use it or abuse it. You can misuse it."

Abu Dhabi has decided to build an aluminum and steel industry, almost from scratch.

"The new equipment — it's around $900 million ... to build what you can see here today," Anderson says, as he watches Italian engineers fine-tune a brand new furnace.

On the other side of the plant, Indian engineers inspect bundles of recently-forged steel wires, which emerge smoking hot from the furnace onto a conveyor belt.

At this factory, only 10 percent of the workers are Emirati citizens. The United Arab Emirates has the money to finance ambitious new projects, but it relies on foreign workers to build and run them.

Sara Lee Whitson of the organization Human Rights Watch is a critic of the United Arab Emirates' labor policy.

"Foreign workers make up 95 percent of the labor pool," Whitson says. "They basically run the entire country, and yet, they do so in conditions where they have absolutely no bargaining power."

Human Rights Watch has criticized the Guggenheim Foundation for signing an agreement to build a modern art museum designed by Frank Gehry in Abu Dhabi. Whitson disagrees with building a museum, which, according to her, will be tainted by the exploitation of incredibly vulnerable workers.

The project in question is a plan to build an entire cultural district in Abu Dhabi, including a futuristic arts center and a branch of France's Louvre Museum that will consist of a huge, white dome riddled with skylights over a network of man-made islands on the edge of the Persian Gulf.

Skeptics may scoff, but if anyone has money to complete these projects, the princes who rule the United Arab Emirates — and who control one of the biggest sovereign investment funds in the world — do.

Everyone seems to want a piece of the action.

Last weekend, businessmen and ambassadors from around the world sat on couches and sipped tea in the court of United Arab Emirates' Education Minister, Sheikh Nahyan Bin Mubarak al Nahyan.

They were waiting for their host, Sheikh Nahyan, who was busy. He was sitting beside soccer legend Pele, who was chatting in front of television cameras with a young Emirate boy.

To the applause of those attending, the Brazilian soccer star signed an agreement with the Arab prince to open a new sports academy in Abu Dhabi.