Accessibility links
'Beowulf' Sexes Up, Dumbs Down an Epic Forget Grendel: The monster here is director Robert Zemeckis, who has turned an ancient literary classic into a blood-soaked, 3-D fanboy fantasy that panders with demonic energy to the young male demographic.

Listen
'Beowulf' Sexes Up, Dumbs Down an Epic 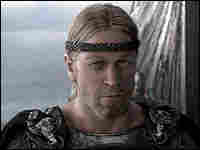 Viking hero Beowulf is played by Ray Winstone — or a pixilated version of him, anyway — in Robert Zemeckis' video-game version of the literary classic. hide caption

It's been 50 years since Hollywood first started flirting with 3-D movies, and the special glasses required for viewing have gotten a whole lot more substantial. The stories being filmed are just as flimsy.

Of course Beowulf does have a more impressive literary pedigree than, say, Bwana Devil. But you'd never know that by looking at the movie.

Beowulf's story of a hero who slays monsters has become a fanboy fantasy that panders with demonic energy to the young male demographic. Even coming-attractions dialogue that's what you'd expect — or maybe a little stupider — doesn't prepare you for a movie that's overstuffed with gorefest moments I'd rather not describe. Ah, to be 15 again.

If you're old enough to vote, however, seeing all this splatter in 3-D may not be the thrill of a lifetime. And seeing the naked body of an old and overweight man in that extra dimension is probably not a treat for anyone, of any age.

Director Robert Zemeckis employs the same performance-capture system he used on The Polar Express, and it doesn't help. The technique transfers the actors' motions to the screen, but allows their appearance to be monkeyed with. So Angelina Jolie can look naked as the monster Grendel's mother. No wonder he's got problems.

What's most troubling about Beowulf, though, is what it says about the Zemeckis' career. He's gone from being a director of stories to an orchestrator of eye candy — and a willing slave to technological advances. But rarely has so much expensive technique been put at the service of such feeble and pathetic screenwriting. The man who brought you Forrest Gump now worries about spurting blood. Thus does Hollywood devour its young.