Accessibility links
Iraqi Ethnic Tensions Stoke Insurgency in Mosul While insurgent violence is down in Baghdad, U.S. and Iraqi forces continue to face a tough fight in Mosul, the largest city in northern Iraq. The surge of American forces into Baghdad pushed some insurgents northward into the Mosul area. 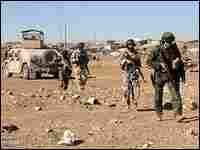 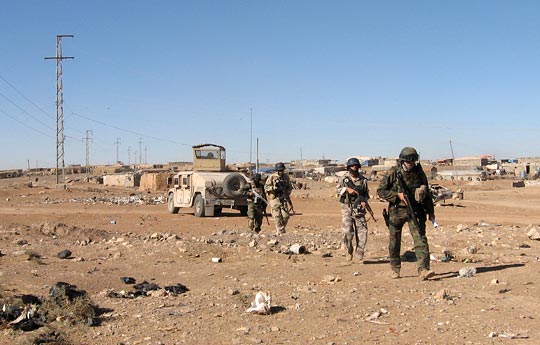 U.S. and Iraqi troops patrol in Mosul. Members of the 2-7 Cavalry believe the sprawling outdoor vegetable and sheep markets serve as cover for insurgents to smuggle weapons and explosives. 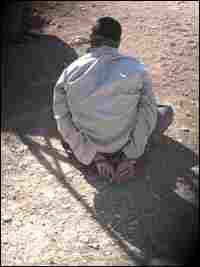 A suspected insurgent, detained in Mosul by the 2-7 Cavalry, is blindfolded and handcuffed. Eric Westervelt, NPR hide caption 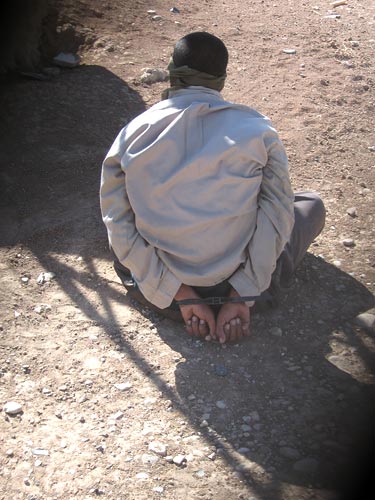 A suspected insurgent, detained in Mosul by the 2-7 Cavalry, is blindfolded and handcuffed. 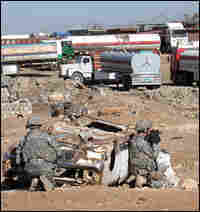 U.S. soldiers with the 2-7 Cavalry take up positions during a raid in southwestern Mosul. Eric Westervelt, NPR hide caption 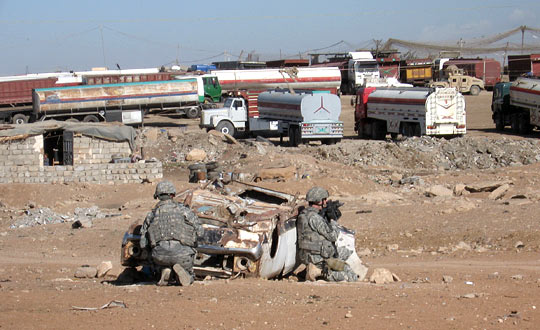 U.S. soldiers with the 2-7 Cavalry take up positions during a raid in southwestern Mosul.

While insurgent violence is down in Baghdad, U.S. and Iraqi forces continue to face a tough fight in Mosul, the largest city in northern Iraq. The surge of American forces into Baghdad pushed some insurgents northward into the Mosul area.

U.S. commanders say the influx of Sunni fighters, so far, has been manageable. But, they say, the cornerstone of any long-term stability remains elusive: political cooperation between Kurds, who dominate the regional government, and Sunnis, who continue to feel disenfranchised.

First Sgt. Chris Prosser is in a lead Humvee of a raid by the entire battalion — including tanks and helicopters — into a predominantly Sunni neighborhood in the southwest corner of Mosul.

The densely packed city starts to give way to countryside. Multiple roads from the south, the west and suspected smuggling routes from Syria all feed into this part of Mosul. Members of the 2-7 Cavalry believe the sprawling outdoor vegetable and sheep markets here serve as cover for insurgents to smuggle weapons and explosives. And this day, they've deployed the entire battalion — supported by several hundred Iraqi soldiers — to try to disrupt it.

A Bombing, Then a Chase

As the convoy pushes forward, bustling streets are quickly emptied as shopkeepers anxiously shutter their metal gates. Soon word comes of a roadside bomb attack on a lead tank and of a possible trigger man in a yellow shirt fleeing southward toward Prosser's unit. Soldiers see two young male Iraqis running and give chase.

The two fleeing Iraqis scramble over a brick wall into someone's muddy backyard.

Prosser orders the Humvee to smash down the home's locked, front metal gate.

The driver revs the engine and speeds toward the door.

The front gate is destroyed, and so is the Humvee's axle, which lies broken in the sand. Soldiers bail out to give chase while the gunner and driver argue over the immobilized Humvee.

In the back of the house, soldiers have corralled the suspected insurgents. The two 20-something Iraqi men crouch on their knees near a couple of sheep and the owner of the house who's gate was just smashed in. He's an elderly man wearing a black robe and a scornful look on his face.

Iraqi soldiers begin to question the Iraqis as Army Capt. Sean Richardson snaps pictures of their faces when, just up the road, another roadside bomb explodes.

No one is seriously injured. But the nearby explosion makes the Iraqi soldiers seem more convinced than ever that the two suspects they've helped round up are involved in the roadside attacks.

"Innocent people don't take off running like that," says Saud Halaf is with the 2nd Battalion of the Second Iraqi Division. "If he did nothing wrong, why did he run?"

One of the suspects gives his name as Ahmed Abdullah. He was wearing multiple layers of clothing on a hot day, suggesting he planned to shed clothes to change appearance while fleeing. He cowers in the dirt and insists he did nothing.

"I ran because of the bullets," Abdullah says. "I felt scared one of them would hit me and kill me."

The vast majority of Iraqi soldiers on this raid are Kurds. They take the Sunni Arab suspects away handcuffed and blindfolded. Richardson apologizes to the family for smashing down their front gate and moves out.

"Sorry for the inconvenience and appreciate you staying calm while we're here," he says through a translator. "Stay safe and God bless."

It's another relatively routine day for the 2-7 Cavalry, which is nearing the end of a 15-month tour in Mosul. This day, the unit detains 10 suspects. Initial tests show several of them have traces of explosives on their hands. Half of those detained are from Baghdad and other cities to the south.

"The pressure's on them down there," Prosser says. "But up here, they have a little more freedom to maneuver now."

Cooperation from local Sunnis this day is negligible. Most people stay indoors, frightened. In all, the battalion is hit by three roadside bombs and takes small-arms fire. No weapons are found.

'A Sense of Distrust'

Prosser is asked if he thinks aggressively moving into Sunni areas with an entire battalion of U.S. soldiers and bashing down doors might end up fueling the insurgency they're trying to counter.

"I understand that it's not going to be perfect, even with the Iraqi army," Prosser says. "Try to put it in perspective of what if someone was in America doing the same thing, how would I feel? It might create a sense of distrust or whatever amongst them. But it keeps our soldiers safe and it ... helps enforce security."

Sunni Arabs make up about 46 percent of Nineveh province, of which Mosul is the capital.

Kurds make up about 40 percent, yet they occupy more than three-quarters of the provincial council seats and make up more than half of the police and army forces in the province. Here many Sunnis, whether former Baathists or those allied with Al-Qaida in Iraq, continue to fight U.S. and Iraqi forces most every day.

In Mosul, there are no tribal "awakening councils" or "Concerned Local Citizens" brigades, the U.S.-funded project that has helped win over some Sunni tribes and former insurgents in parts of central and western Iraq. Here, creating a concerned local citizen or CLC brigade is simply unrealistic given the volatile ethnic tensions, says Col. Stephen Twitty. He commands the First Cavalry division's 4th brigade, which is responsible for Mosul and all of Nineveh province.

"It's very difficult and we want to make sure that we go about it correctly to ensure that we accommodate every ethnic group and we're not fueling the insurgency more by placing these CLCs in places where they do not need to be in place," Twitty says.

Sunnis largely boycotted parliamentary elections in January 2005 and that's why the Kurds have remained dominant here ever since. The Sunnis' continued lack of political clout, Twitty says, is stoking the insurgency in Mosul.

The commander is cautiously optimistic that Sunnis and Kurds eventually can hammer out a power-sharing deal. There's key legislation many believe will foster compromise: It's called the Provincial Powers Act and clarifies federal and provincial lines of authority and lays out a timetable for new regional elections. But the bill remains stalled amid sectarian infighting in Iraq's parliament. Without some political help from Baghdad, Twitty says, Sunnis around Mosul will continue to fight.