Accessibility links
Revisiting Giuliani's Role as 'America's Mayor' Rudolph Giuliani's response to the Sept. 11 attacks revived his political career and primed him for a presidential run. But critics question some decisions made before the attacks, including locating emergency operations in the World Trade Center. 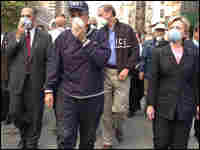 Then-Mayor Rudolph Giuliani leads a group of policymakers, including Sen. Hillary Clinton (D-NY), on a tour of the site of the World Trade Center disaster the day after the attacks in New York. Robert F. Bukaty/AFP hide caption 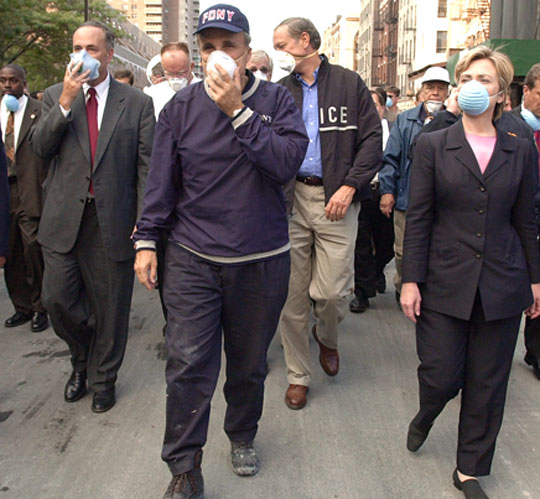 Then-Mayor Rudolph Giuliani leads a group of policymakers, including Sen. Hillary Clinton (D-NY), on a tour of the site of the World Trade Center disaster the day after the attacks in New York. 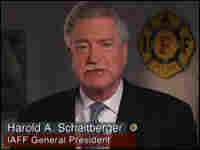 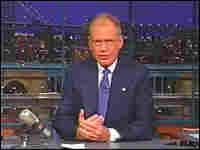 Read about Rudy Giuliani's political career and his prospects as a presidential candidate:

Some images from the attacks of Sept. 11, 2001, can never be shaken. One of them is Rudolph Giuliani marching out of lower Manhattan, through the dust and ash of the collapsed World Trade Center.

Even as he joined the throngs of people seeking escape, he took command, issuing orders through a small group of reporters who followed him.

And while President Bush didn't deliver a major address to the nation until that evening, Giuliani had news conferences throughout the day, speaking to New York and the nation and finding just the right tone for the millions stricken with grief and horror.

"The city's going to survive. We're going to get through it," Giuliani said. "I don't think we know the pain we're gonna feel when we find out who we lost."

Giuliani urged Wall Street and Broadway and all of New York to get back to business as quickly as possible.

Giuliani's response to the attacks was praised by New Yorkers as well as Americans across the country. Yet just the day before, many New Yorkers couldn't wait for him to leave office. Giuliani had spent his second term picking fights jaywalkers and an art museum. He had outraged the African-American community with his defense of controversial police shootings.

But Giuliani's performance on Sept. 11 revived his political career and is providing a rationale for his run for the White House.

Giuliani Through a New Lens

In his first show after the attacks, David Letterman called Giuliani the "personification of courage."

"If you're like me and you're watching and you're confused and depressed and irritated and angry and full of grief and you don't know how to behave," Letterman said, all you have to do is watch the mayor.

The sentiment was repeated a thousand times over. Giuliani was dubbed America's mayor, named Time magazine's Person of the Year and knighted by Queen Elizabeth.

The world saw him through a new lens, says Dan Schnur, who was Sen. John McCain's communications director during his presidential race in 2000.

"Rudy Giuliani had always been the tough guy, but in the aftermath of Sept. 11, he wasn't just Tough Guy Rudy, he was Tough Guy Rudy who cared and helped hurting New Yorkers through a very difficult situation," Schnur said.

But some say that difficult situation was made worse by decisions that Giuliani made before Sept. 11. For example, firefighters were still using the same radios that had malfunctioned eight years earlier, the first time the World Trade Center was attacked.

Hundreds of firefighters never heard the evacuation order and got trapped in the collapsing towers, according to Wayne Barrett, co-author of Grand Illusion, a book about Giuliani and the Sept. 11 attacks.

Barrett also said the now-iconic image of Giuliani trudging through the smoke-filled air only occurred because the mayor couldn't get into his emergency operations center. He had chosen to locate it in the World Trade Center, building No. 7, 23rd floor.

"No one would say Rudy Giuliani was a dumb man, but probably the dumbest thing he ever did was put the command center in the only complex that had previously been attacked by the terrorists," Barrett said. "So the visual that's propelling him toward the presidency is, in fact, a commentary on his own weaknesses."

Barrett and other critics have also blamed Giuliani for failing to enforce safety standards for firefighters and others working in the wreckage of the World Trade Center. Many of those workers have developed respiratory illnesses, and the city of New York now faces thousands of lawsuits. The Giuliani campaign did not respond to requests for an interview.

In any case, the criticisms have so far failed to gain much traction.

Matthew Dowd, who was a pollster and campaign strategist during President Bush's two runs for the White House, said that's because voters feel they already know what Giuliani did Sept. 11.

"I don't think it's really all that possible to harm him by going back to a time that voters believe they already have a picture of, and which is positive," Dowd said.

He said Giuliani is identified so strongly with Sept. 11 that he doesn't even have to remind voters of it.

He often does so anyway, to the delight of political cartoonists who've satirized him.

"I mean, there's only three things he mentions in a sentence: a noun, a verb and 9-11. I mean, there's nothing else," Biden said in a recent Democratic debate.

During his presidential campaign, Giuliani has risen in the national polls because he has expanded the meaning of his performance on the day of the attacks, according to Dowd.

And for many voters, that has trumped the social issues that have played such an important role in past GOP primaries.

Schnur said Giuliani's association with Sept. 11 is what has allowed the abortion-rights, thrice-married candidate to win over some of the party's cultural conservatives. These voters see Giuliani as an effective leader — not only because he has a national security platform that they agree with, but also because he has turned the fight against terrorism into a social and culturally conservative issue, Schnur said.