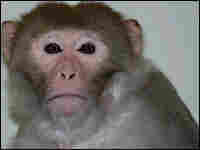 Semos, a rhesus macaque, was the donor for the cells used in the cloning experiment. Image Courtesy of Oregon Health and Science University hide caption

Scientists in Oregon are the first to successfully clone a primate embryo. The research team at Oregon Health & Science University used skin cells from rhesus macaque monkeys to create the cloned embryos. They then extracted embryonic stem cells from the just-created embryos.

The new work is published online in the journal Nature.

In 2004, Korean researchers fraudulently claimed to have used a similar process to clone a human embryo.

Scientists have announced another first in cloning: They have cloned a primate embryo. The researchers in Oregon say they used those cloned monkey embryos to derive embryonic stem cells.

A few years ago, South Korean scientists said they had done the same thing with human cells, but that turned out to be a fraud. The journal that published this new work took the unusual step of having an independent laboratory verify the results.

Researchers hope to one day use such a process in humans to create customized stem-cell therapies for individual patients.