Accessibility links
Rare National Buzz Tipped Obama's Decision to Run Barack Obama was barely halfway through his first Senate term when he began considering a presidential run. In the end, he chose to take advantage of a rare window of political opportunity that had opened for him so quickly — knowing it could close just as fast. 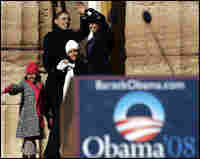 Sen. Barack Obama (D-IL), with his wife, Michelle, and daughters, Sasha and Malia. Obama announced in February that he would run for president. Friends of the couple say the Obamas worried about how years of high-intensity campaigning would affect their daughters. Jeff Haynes/AFP/Getty Images hide caption 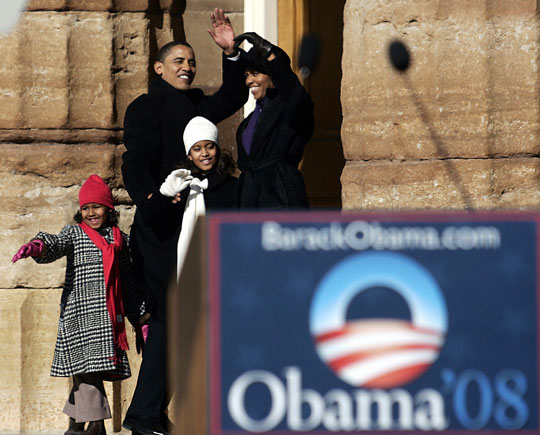 Sen. Barack Obama (D-IL), with his wife, Michelle, and daughters, Sasha and Malia. Obama announced in February that he would run for president. Friends of the couple say the Obamas worried about how years of high-intensity campaigning would affect their daughters. 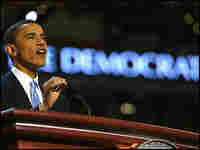 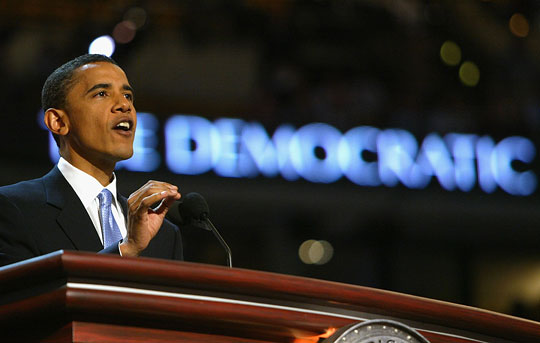 The buzz for Obama's White House run started almost immediately after he delivered the keynote address at the Democratic National Convention in July 2004. 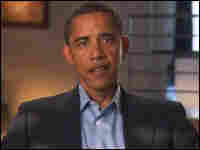 To Run Or Not to Run?

Barack Obama was still weighing a White House run when he spoke to All Things Considered host Michelle Norris last October. Listen to the interview:

Read about Barack Obama's political career and his prospects as a presidential candidate:

— Loss in House Race May Have Aided Obama's Presidential Bid

Barack Obama was barely halfway through his first Senate term when he began seriously considering a run for the White House.

In the fall of 2006, the Illinois senator reached out to friends and political mentors for advice. In the end, Obama chose to take advantage of a rare window of opportunity that had opened for him so quickly — knowing it could close just as fast.

Obama came to national attention after a rousing speech before the Democratic National Convention in 2004, where he shared his own compelling American story: His white mother grew up in Kansas, his black father, in a tiny village in Kenya; they met and married in Hawaii.

"In no other country on Earth is my story even possible," Obama said at the time. And soon after, a new world of possibilities opened up: The state lawmaker won the Illinois senator's race — and the White House buzz began almost immediately after.

"His reaction to it was, it was flattering, but he was focused on his duties as a U.S. senator," says David Axelrod, now media strategist for Obama's presidential campaign. "It was not in his plan to run for national office in 2008."

A Constellation of Political Factors Aligned

But over the next 18 months, Obama began taking the buzz seriously, Axelrod says. Democratic Party officials were inviting Obama to speak at campaign stops for their candidates nationwide, and he was drawing large and enthusiastic crowds. Nearly every media appearance seemed to invite questions about his presidential ambitions.

When asked the question in October 2006, the senator told Michelle Norris on All Things Considered that he didn't want to talk about a presidential run. Perhaps that was true in public. Privately, Obama was discussing the issue with friends and political mentors like Abner Mikva.

"I think he realized that, whatever the constellation of political factors that go into play about when is the right time, this was the right time for him," says Mikva, a former congressman, federal judge and longtime friend. "If he chose not to run, this wasn't a matter for waiting till next time. This could be as long as a 12-year wait."

Mikva and others say Obama first had to convince his wife, Michelle. Friends of the couple say they worried about how years of high-intensity campaigning would affect their children Malia, 9, and Sasha, 6.

Finding a balance between family life and political life is something Michelle Obama still discusses on the campaign trail. Last month in California, speaking on a panel of would-be first ladies, she told the crowd that there has always been a bit of hesitation on her part.

"I'm very practical. I have to know how this is going to play out. And Barack is like, 'Let's do it,'" Michelle Obama said. "There are a lot of practical considerations that we had to go through. And I had to know that we were thinking this thing through in a way that our family would stay grounded and stable through the process."

Once they were both on board with considering a run, the couple turned to David Axelrod for advice. In November 2006, they asked him for research and aired their own questions about launching a campaign. Axelrod had previously consulted for former senator John Edwards' presidential bid. He knew what Obama would be up against — in terms of money and organization, and rivals with greater credentials.

"I think he understood when he made the decision that his was not the traditional Washington resume," says Axelrod. "Obviously, if people ultimately decided that what they wanted was years of Washington experience, he would not be the nominee. I think it was his strong feeling that that isn't what the country needs right now."

Obama also weighed the issue of his political experience with other friends, such as Illinois State Senate President Emil Jones.

"There were those who said, 'Well, he's young.'" Jones says. "Well hell! JFK was already president at his age, so therefore, he's not too young."

By December, Obama was meeting with Axelrod once again; this time, his future campaign manager, David Plouffe, was also in attendance. But the senator had still not made an official decision. Obama first took his family back to his childhood home of Hawaii for an end-of-year vacation. When he came back in January, he filed papers for a presidential exploratory committee.

"This is not a dry run," Axelrod says. "This is a campaign for the future of this country, at a time when this country is in desperate need of change. I know he is focused on the here and now, on the urgency of this moment, and that is what motivates him."