Accessibility links
'Runnin' Down' a New Petty Documentary Along with his band The Heartbreakers, Tom Petty has long personified the sound and spirit of good, strong, American rock 'n' roll music. A new documentary by Peter Bogdanovich tells the story of the band's lengthy career. It's four hours long.

View the trailer for the new documentary Runnin' Down a Dream: 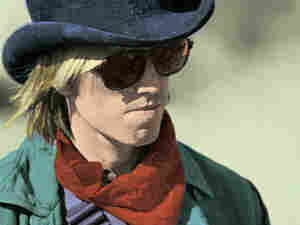 Runnin' Down a Dream is being released as a four-disc box set containing the documentary, a live concert DVD and a CD soundtrack. Courtesy of Tom Petty hide caption

Along with his band The Heartbreakers, Tom Petty has long personified the sound and spirit of good, strong, American rock 'n' roll music.

Petty and his band have been rock stars for 30 years and have lived to tell about it. Now, Petty is the subject of a new documentary, called Runnin' Down a Dream. Produced by Peter Bogdanovich, the film took more than two years to make and spans four hours.

"I didn't want this to go down the [VH1] Behind the Music rock-doc thing," Petty says. "So many rock documentaries are so predictable and not very interesting. And I think our story was a unique one and I know [Bogdanovich] would make an honest film."

Scott Simon spoke with Petty and Bogdanovich about their new project.

"The first time Peter came to a rehearsal, he was standing about 15 feet away from the band, and we kicked in, and I just — I saw his hair stand straight up," Petty says. "And he said, 'My God, I don't think I've ever been so close to a band before.'"

Bogdanovich said he became a big Petty fan over the course of production.

The film features home tapes, concert footage and interviews with fellow musicians. One segment captures Stevie Nicks of Fleetwood Mac admitting that if Petty had asked her to join his band in the late 1970s, she just might have.

"I just always told her, 'We just don't have any girls in the organization, Stevie,'" Petty says. "It's a men's club, you know."

Petty says that watching the film made him grateful for his long career.

"I feel pretty blessed really right now, when I see it, that most of us made it through that maze that is growing up in rock 'n' roll," he says. "And I think we've matured in a way that we're maybe better now, you know, maybe better musicians, and enjoying our craft more than we ever have. So I'm very lucky."

So what's next for Bogdanovich?

"I'm not going to do another one like this," Bogdanovich says.

Petty interrupted. "Could kill you doing another one like this."