Accessibility links
Hussein Retreat House a Remnant of Former Self The former property of Uday and Qusay Hussein, the diabolical sons of the former dictator of Iraq, is now home to the 3rd Infantry Division. The retreat along the Tigris River is a dusty, dirty, broken place.

Listen
Hussein Retreat House a Remnant of Former Self 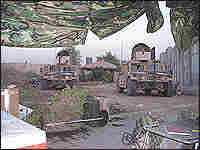 The manor house on the Tigris River still has some of the touches of its former life: ornate light fixtures, a dining room table that could seat 20, a swimming pool with a stream and pond.

It now houses the Battle Boars of the 3rd Infantry Division.

But not too long ago, it was the retreat of Uday and Qusay Hussein, the diabolical sons of the former dictator of Iraq.

The call to prayers comes on schedule, just like it did when Saddam's sons were here. These days, though, it blends with a more foreign sound.

Soldiers strain to lift barbells in a circular outdoor building that includes a barbecue pit and wraparound bar.

Spc. Robert Neidert and his squad commandeered this manor a few months back. They found the house looted. Locals carted away furniture, chandeliers and fixtures.

"There was nothing that said that anybody had lived here," Neidert says.

A medical staff works in a room just off the pool. On this day, the team is treating an Iraqi teen injured by a roadside bomb.

Still another room serves as an operations center. Maps cover the wall. Soldiers monitor banks of computers and radios.

Neidert says that when he first arrived, the property was something of an Eden.

Scores of Humvees and armored vehicles cover the property — kicking up billowing clouds in their wake.

The patio is full of broken stonework that now resembles a scattered jigsaw puzzle.

"I'm guessing it was a place for everyone to congregate and throw a party," Neidert says.

He heads toward the Tigris River, wide and open and pristine. Tall reeds wave along the banks. A large white bird skims along the water, then rises into the sky.

"It's a nice view. If you look down that way toward the north, you can see Baghdad, where I was last time when I was over. I've got a chance to walk up and down the river down in sector. It's really beautiful," he says.

Neidert is a fresh-faced kid from Carson City, Nev. He seems decent and hardworking, unlike the former residents of this house. He's trying to make life a little better for the locals, and help rebuild this little corner of Arab Jabour.