Scott Simon talks with writer and All Things Considered book reviewer Alan Cheuse about The Fires, his new book of two new novellas.

Alan Cheuse has a couple of new novellas out in which people set fires to something precious - in one case, to keep a promise; another, to send out a call of distress. People make journeys to saw up some old relationships and learn all over again about how love flares and loss smolders. His new book is called "The Fires."

Alan Cheuse is the voice of books for millions of public radio listeners, the man who reviews books and talks about literature on a promising little daily news program called ALL THINGS CONSIDERED. And he also teaches at George Mason University and joins us in our studios.

SIMON: First question is actually about novellas - midway between, if you will, the short story and the novel. Is it a difficult form in a particular way?

SIMON: First story, "The Fires." A woman named Gina Morgan goes to Uzbekistan to honor the wish of her late husband that he be cremated; he's killed on a business trip there. Then she discovers that he can't be, or at least not obviously.

CHEUSE: Yeah. The procedures for cremation in a predominantly Muslim culture are apparently quite difficult.

SIMON: But it's important to her to be able to honor that.

CHEUSE: That's his wish. And she struggles to fulfill it. And discovers some new things about her own life in the process.

SIMON: Let me get you to read a section of that, first, if I could.

CHEUSE: Sure. This is the husband in the car, driving across the Karakum Desert in Uzbekistan.

(Reading) Winds coming up, swirling dust alongside the patchy road. Good cars, these Mercedes, but the best suspension system in the world is eventually going to go to hell from riding these roads. There goes this song, darkness falling upon the desert with the swiftness of a lighting cue in a stage play. Woomp(ph), all black.

It took a minute for him to adjust where suddenly he went from seeing the narrow strip of paving, snaking out ahead of the car away along towards some point in infinity. Though he knew that if he kept driving, he would eventually reach the great cotton fields around Urgentra(ph) in the other side of the desert.

And suddenly having a world reduced to the roadway within the limits of the headlamps. Mr. Morgan? The drunken driver stirred in the backseat. Yes? You want me to drive now? I'll keep the wheel for a while, he said. If I get too tired I'll tell you. But the truth was that he was already so monstrously tired that he didn't want to stop the car, but wanted desperately to keep going.

He tried to count the times (unintelligible), but gave up after a moment, trying to focus on the small flickering light on the horizon - a fire, a signal fire of diligent flames, a burning bush. A few minutes went by and the light, the fire disappeared.

SIMON: When you read that section one of the things that some of these Uzbeks can't understand about Mr. Morgan is that he's driving the car even though he has a driver.

CHEUSE: Yes. But what happens is the driver is very drunk. And so he takes the wheel himself after suffering great fatigue in business meetings and changing time zones, and drives when he should not be behind the wheel. If there is a moral in the story, that's the only one.

SIMON: The second story, "The Exorcism."

SIMON: It's not the kind of a cremation says a young college student who sets fire to a piano. She's thrown out of her fancy college. Her father has to drive to pick her up. And they have some unsettled scores between them.

CHEUSE: She sets fire to the piano because her mother is a famous American jazz pianist, who just died of an overdose, and she is very angry. The young woman has been angry with her mother and her father for years. And this is the way she expresses it like those fires in the first novella on the horizon of the desert at night. The fire in that grand piano at that fancy New England College is a kind of signal fire also.

SIMON: The father-daughter dialogues in the story are terrific.

SIMON: The daughter almost always has a tone of certainty.

CHEUSE: Yes. Well, we all know everything when we're at that age in college, don't we? We know we have a certain kind of parent that we're struggling against. And it's even more difficult when one of the parents has suddenly died.

SIMON: Without giving away any plot points, the father and daughter in the car undertaking this journey and a pack of dogs appears…

SIMON: Which has seems to alter the atmosphere, the whole chemistry that surrounds them.

(Reading) I was driving south on 95 between Baltimore and Washington, and without any notice this pack of dogs - seven or eight of them - came racing toward us in between four rows of automobiles going 70 miles an hour. And it was over in an instant and everything could have been over in an instant if anyone of us and anyone of the cars might have hit the dogs.

SIMON: And the effect in the story is almost like throwing a lighted match into (unintelligible).

CHEUSE: Well, those are the kinds of things we either are destroyed by or marvel at after we escaped them.

SIMON: How much do you read a year?

SIMON: How does all that reading affect your writing, or do you have to careful that it don't?

SIMON: And you have to read a lot of students' work, too, at the same time.

CHEUSE: It's wonderful because you can see good writing in the making. And you give a few tips, and I don't mean to diminish the study of craft by saying it's kind of like being tennis coach, but you have great athletes and you try to help them become even greater than they are. But as Mary Robinson(ph) in a story about a football coach, as his character say, I can tell my players what to do, but I can't get down inside them and change their hearts. So you teach the technique and the rest is up to the individual artist.

SIMON: Alan, thank you so much.

SIMON: Alan Cheuse. His new book, a pair of fine novellas, has been published under the title "The Fires" by the Santa Fe Writers Project. 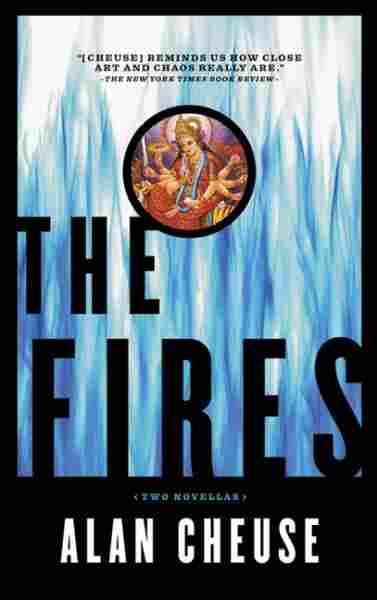