Accessibility links
Giuliani Leads GOP Rivals in Texas Fundraising Republican presidential candidate Rudolph Giuliani is winning the battle for political donations in Texas. The former New York mayor has collected three times as much as any other GOP contender. 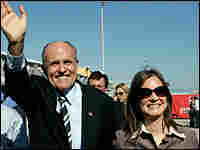 While the presidential candidates comb Iowa and New Hampshire for votes, they are also combing the country for dollars.

Rudolph Giuliani has set his sights on Texas, and he is having a lot of success.

Giuliani might have seemed the least plausible choice of big Republican donors in Texas. The former New York City mayor supports abortion rights, gay unions and gun control. And his political base is 1,400 miles away in a city that is practically synonymous with liberal Democrats.

Yet Giuliani has raised more money in Texas than anyone in either party. He has taken nearly $6 million out of the state as of Sept. 30. That is compared to just over $2 million for the next closest Republican — Mitt Romney.

The strategy is both public and private. There have been public endorsements, including one last month from Texas Gov. Rick Perry. And Giuliani is tapping Texas money through other sources, including Roy Bailey, a low-profile insurance millionaire in Dallas.

Bailey volunteered to raise money for Giuliani way back in 2000, when Giuliani was going to run for the U.S. Senate. They reportedly bonded over a common desire to keep Hillary Clinton from winning the seat.

Giuliani did not run, and Clinton won the New York Senate seat. But Giuliani did make a friend, and when Giuliani left his job as mayor of New York City, Bailey helped create and bankroll the consulting firm Giuliani Partners.

It is a mostly Republican firm with offices in Texas, Washington and Kazakhstan.

"Anytime you get a big establishment law firm in a large city — Houston is the fourth-biggest city in the country — they can call their client list and their friends and the lawyers in the firm itself, and they can raise a lot of money with an operation like that. I think it's very significant," said Ross Ramsey, editor of Texas Weekly, an online newsletter about the state's politics.

Giuliani's contacts at Bracewell have given his campaign $103,000 dollars.

George Edwards, a political scientist at Texas A&M University, says Giuliani's ties to the firm count even more in this wide-open Republican contest.

"In effect, the firm is saying he's OK. And in a field such as we have today, in which there's no candidate for whom there's great enthusiasm, these cues are particularly effective," Edwards says.

His Bracewell contract also has been a lucrative job for Giuliani while he runs for president. The contract guarantees him at least a $1 million annual income.

The campaign says he currently has no day-to-day involvement with Giuliani Partners or Bracewell.

But the Texas connection adds a lot to the Giuliani campaign.

Bailey is now the campaign's national finance chairman. Oxford is the national campaign chairman. The campaign made neither of them available to be interviewed for this story.

Raising a lot of cash does not give Giuliani a lock on the Texas primary.

"We're not going to hold his fundraising success against him, but I can tell you, if he were on the ballot down here and there was still a race going on, he's going to have to come up with a lot more than money to prevail in the state of Texas," said Lee Woods, a longtime consultant for conservative Republicans.

That vote is not until March, and right now, Giuliani is spending his Texas money all over the country in an effort to capture the nomination much earlier.