Accessibility links
Plant and Krauss: Rock and Bluegrass Collide : World Cafe Robert Plant has helped establish the iconic image of the "rock god," while Alison Krauss is one of the most accomplished bluegrass musicians of the last few decades. Together, they've recorded Raising Sand, which interprets blues, folk and country songs. Hear an interview. 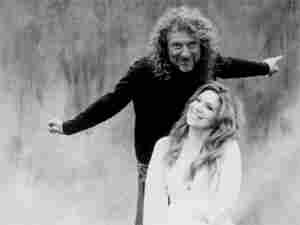 Whether singing for Led Zeppelin or on his own, Robert Plant has done more to establish the iconic image of a "rock god" than perhaps any other frontman. Led Zeppelin was, and still is, one of the most successful rock groups in history; its combination of impeccable musicianship, earth-shattering live performances and innovative songwriting helped ensure its place as a towering influence in rock 'n' roll.

Alison Krauss is one of the most accomplished bluegrass musicians of the last few decades. As a singer and fiddler, Krauss has been instrumental in bringing folk and bluegrass music to a wide audience.