Accessibility links
Key Players from Stanford and Cal Relive 'The Play' One of college football's most electrifying moments took place exactly 25 years ago. The final kickoff in the annual battle between rivals Stanford and Cal was so ludicrously improbable, that it has become immortalized simply as "The Play."

Listen
Key Players from Stanford and Cal Relive 'The Play' 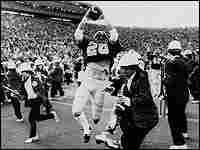 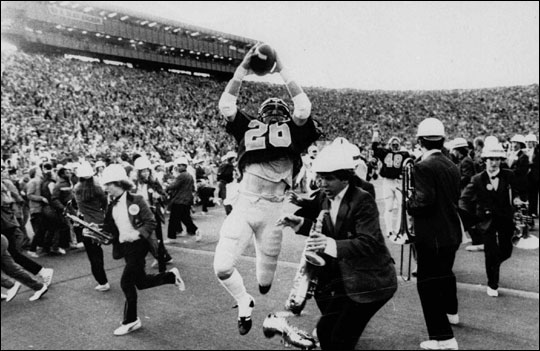 Cal's Kevin Moen (26) leaps after scoring the winning touchdown and scattering the Stanford band in Berkeley, Calif., on Nov. 20, 1982. 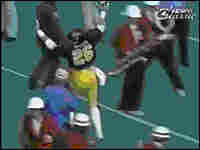 Watch Video of "The Play"

What Became of the Players?

Gary Tyrell went on to become chief financial officer of a venture capital company in the Bay Area.

John Elway went on to have a record-breaking NFL career. He started in five Super Bowls – more than any other quarterback.

Joe Starkey continued to have a successful career as a play-by-play announcer.

Kevin Moen went on to work in real estate in Southern California.

Every hard-core sports fan has his or her favorite moment that can't be topped: a buzzer-beating jump shot, a game-winning home run, a hail-Mary touchdown pass.

Among college football fans, one of those moments took place 25 years ago. It was so ludicrously improbable that it became immortalized simply as "The Play."

The Nov. 20, 1982, "Big Game" between rivals Cal and Stanford was intense from beginning to end. The lead changed hands several times.

In the final two minutes, star quarterback John Elway led Stanford on what appeared to be a game-winning drive. The crowd went wild.

With a 20-19 lead and only eight seconds left on the clock, Stanford's victory seemed certain.

The Stanford marching band sprung to the end of the field, adding to fans' celebratory frenzy.

"We were just rockin' out, playing "All Right Now." And, while this was going on — we're high-fiving — they still had to do this kickoff behind us," recalls Gary Tyrell, lead trombone player.

Up in the booth, longtime play-by-play announcer Joe Starkey said, "Only a miracle can save Cal."

A miracle he would get, in the form of 21 seconds of perfectly bizarre spontaneity.

The Cal players stormed the Stanford end zone, catching the entire stadium off guard. As one player was about to get creamed by a Stanford defender, he flipped the ball to another Cal player running behind him.

Moen says that the most spectacular lateral — there were several — was the one by his teammate Morrett Ford, who tossed the ball back over his head to Moen while diving into a couple of players.

Indeed, Moen — who started it all — grabbed the fifth and final lateral and ran into the end zone, dodging startled band members and their instruments left and right.

He managed to get around everyone in the end zone except Stanford band member Tyrrell, who was busy celebrating what he thought was a Stanford victory.

"I saw this Cal player in the end zone ... and he had the football," Tyrrell recalls. "Next thing I know, I'm sittin' on the Astroturf!"

Moen had smashed into Tyrrell, knocking him down.

"What I recall is a bump," Moen says. "It really didn't register that I ran over the trombone guy. You know looking back at it — it was fun. It made the final note in that play," Moen says.

Starkey's call of the game was anything but understated:

"Oh my God! The most amazing, sensational, dramatic, heart-rending, exciting, thrilling finish in the history of college football!" he screamed hoarsely into the microphone. "California has won the big game over Stanford."

Of course it was a sour note for Stanford. Some directed their anger at the band, although the video shows band members never really got in the way of Stanford defenders during the play.

Tyrrell took some personal hits. A local newspaper flaunted a photo of Moen about to crash into Tyrrell with the headline, "Stuff this in your trombone."

But time heals most wounds. Tyrrell and Moen have become friends and Tyrrell's trombone is now a fixture in the College Football Hall of Fame.

It's a reminder that when an announcer says, "Only a miracle could save them," there's still a chance it will.